Cannabis set to be licensed for medicinal use in Ireland

Government-commissioned review recommends the medicinal use of the drug 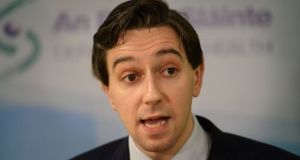 Cannabis should be made available to treat a limited number of medical conditions, despite the lack of evidence for its effectiveness and safety, a Government-commissioned review has recommended.

Minister for Health Simon Harris will on Friday publish the Health Products Regulatory Authority (HPRA) report on cannabis for medical use.

He will also announce plans for “a compassionate access programme for cannabis-based treatments”.

Medicinal cannabis could be provided to specific categories of patients with multiple sclerosis, severe epilepsy and those suffering intractable nausea and vomiting associated with chemotherapy, according to the recommendation of the expert working group.

“Access to medicinal cannabis is ultimately a societal and policy decision which has to balance the lack of scientific evidence against patient-led demand,” the report by the group said.

Prof Tony O’Brien, chairman of the group, said it is pleased to “cautiously advise” for the restricted use of cannabis products for a limited number of medical conditions.

If a policy decision is made in favour of medicinal cannabis, its use must be controlled and confined to the treatment of specified conditions.

Access should be provided only within a legislative framework that provides for the collation of medical information in a central registry.

“There appears to be a significant gap between the public perception of effectiveness and safety, and the regularly requirement for scientific data which is mandatory to determine the role of cannabis as a medicine,” the report stated.

The report said the scientific evidence for medicinal cannabis is insufficient and “at times conflicting”. Anecdotal reports of its effectiveness are “compelling”.

It said a distinction can be drawn between products containing cannabinoid (CBD) compounds, and those also contained the psychoactive THC element.

Because products containing CBD are not considered “controlled drugs” they can be provided under existing legislation.

It said the HPRA is not recommending treatment with cannabis because of the lack of data but does favour the introduction of a monitored cannabis treatment programme to run for five years.

The conditions for which the group recommends the use of cannabis are spasticity associated with multiple sclerosis, intractable nausea and vomiting associated with chemotherapy and severe, refractory epilepsy.

It recommended against the use of the drug to treat chronic pain.

Department of Health officials and the HPRA are due to consult with stakeholders on how the access programme will operate, and the report will also be referred to the Joint Oireachtas Committee on Health.

Describing the report as “a significant milestone in developing policy in this area”, the Minister said: “This is something I am eager to progress but I am also obligated to proceed on the basis of the best clinical advice.”