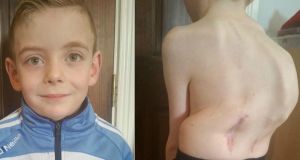 Tommy Long (6) from Ballycallan in Co Kilkenny needs an operation to treat his scoliosis.

Six-year-old Tommy Long from Ballycallan in Co Kilkenny has already had six operations related to his congenital scoliosis.

Now he and his family are awaiting yet another, albeit one that is more serious, invasive and risky than any to date.

“We’re just waiting for the hospital to get back in touch, for the surgery to go ahead,” his mother Michelle said.

Tommy had rods inserted into his back in January of last year but they cut into a bone and had to be removed in September. Now, because of the delay in getting new rods inserted, his spinal curvature has collapsed on itself, putting pressure on his lungs and other internal organs and leaving little room for his lungs to grow as he gets older.

“The operation he has to have now is a hemivertebrae incision and new placement of rods. They have to remove some of the vertebrae from his spine. It’s bigger than getting rods put in, which is big enough, but the risks are now greater. It’s a huge operation with a risk of blood loss and a risk of paralysis.”

However, without intervention, the danger is that the bones would become rigid and fuse, which could prevent any future surgery. “The surgeon said that the risk of not doing it is worse than the risk of doing it.”

The family are hoping the surgery can be done this month, and in one visit. they are hoping to avoid a two-part operation, which is a possibility depending on how many of his vertebrae has to be removed. “He’s already been left too long, every week he’s left, he’s deteriorating.”

Tommy is in “good” form, his mother says, busily attending senior infants at St Aidan’s National School in Kilmanagh where all sorts of adaptations have been made to support him.

“He loves school and the school have been very good to him,” Ms Long said. “He has a very high tolerance for pain, he doesn’t complain easily. But the biggest problem now is the vomiting and not eating well because his abdomen is squashed. He’s losing weight and he can’t afford to lose weight because he’s already thin, which is common in scoliosis patients.

“He’s six so he doesn’t carry the worry that older children might have, which is a blessing. He just gets on with things.”