How might you know that your child has scoliosis? 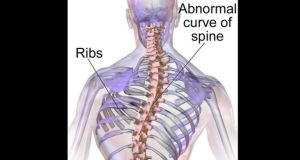 Scoliosis is a sideways curvature of the spine that manifests itself most often during the growth spurt just before a child reaches puberty. The term comes from the Greek, scolios, meaning bent.

Scoliosis is a sideways curvature of the spine that manifests itself most often during the growth spurt just before a child reaches puberty. The term comes from the Greek, scolios, meaning bent.

The cause of an excessive spinal curvature is unknown in most cases. Scoliosis runs in families, suggesting a possible hereditary factor. And while many childhood cases are mild, some children go on to develop a severe and disabling curvature. An especially severe spinal curve can reduce the amount of space within the chest, making it difficult for the lungs to function properly. The heart may also have difficulty pumping against a deformity. Even those successfully treated as children may go on to develop chronic back pain in later life.

How might you know that your child could have scoliosis? Signs and symptoms include: Uneven shoulders; one shoulder blade that appears more prominent than the other; one hip higher than the other; or the ribs on one side of the body stick out farther than on the other side. Boys and girls develop mild scoliosis at the same rate, although females have a much higher chance of the abnormal spinal curve requiring treatment.

A simple X-ray is all that is needed to confirm the diagnosis and reveal the severity of the condition. Treatment decisions are highly individualised but will be broadly guided by the severity of the curve, the pattern of the curve – double or S shaped curves tend to worsen more often than C- shaped ones, and the part of the spine affected (curves in the thoracic part of the spine are more likely to worsen).

Surgery is the next option. The most common procedure is spinal fusion, during which surgeons connect two or more vertebrae together so that they can no longer move independently. In younger patients it means the vertebrae will grow as a single unit. The disc between the vertebrae is removed, leaving metal rods and screws to help hold the spine straight. However, if scoliosis is progressing rapidly in a younger child, orthopaedic surgeons may install a rod that can adjust in length as the child grows. This growing rod is attached to the top and bottom sections of the spinal curvature, and lengthened at regular intervals.

Complications of spinal surgery are no different from other operations and include bleeding, infection, pain and nerve damage.

Operating times for spinal surgery are by necessity lengthy and complex. This has contributed to the backlog of cases at Crumlin children’s hospital, and is why opening and staffing a new theatre there will make a significant difference for those waiting for treatment.

The effects of delaying surgery were outlined by Deirdre McDonnell, of the charity Straight Ahead. Her complex adult surgery involved orthopaedic and respiratory specialists as well as cardiologists at a much increased cost to the State compared with having surgery as a child.