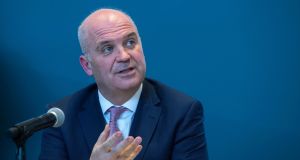 There have now been a total of 1,265 deaths associated with the disease in Ireland, it said.

Another 221 new confirmed cases were also reported, one of the lowest daily figures for some weeks. This brings the total number of cases to 20,833.

The new cases figures is lowest since April 1st.

An analysis of the 20,510 cases reported up to last Wednesday, shows 58 per cent were in women and 42 per cent in men. The median age of cases is 49 years.

The number of healthcare workers diagnosed with the disease now stands at 5,840.

Community transmission accounts for 63 per cent of cases, close contacts for 33 per cent and travel abroad for 3 per cent.

The first Irish case of Covid-19 occurred at least a week earlier than hitherto reported, according to a document prepared for the National Public Health Emergency Team.

A laboratory-confirmed case of the disease occurred in a long-term residential facility in the week from February 17th-23rd, according to a census of these units commissioned by NPHET.

Up to now, it was understood that the first Irish case dated from February 29th, and this case did not involve a resident of a long-term residential facility.

A further two probable cases of Covid-19 are recorded in the census for the week February 24-March 1st, so also probably predate the first recorded case.

The new information, arising from a retrospective sweep of records in nursing and other care homes, appears to show the disease was present in Ireland for a period before it was detected.

The census was commissioned following concerns over the possible under-reporting of Covid-19 related deaths in long-term residential facilities.

It found there were 616 Covid-19 deaths in long-term residential facilities between January 1st and April 19th this year.

It found that 636 more deaths - 365 laboratory-confirmed and 221 probable - occurred in residential care facilities between March 23rd and April 19th this year compared with the same four-week period last year, amid a total of 3,365 deaths.

The deaths rate in these facilities has more than doubled compared to the same period last year as a result of Covid-19.

The results of the mortality census were presented at last Wednesday’s briefing by NPHET, at which officials were questioned about a media report that cases had occurred before February 29th.

Officials said they were unaware of the report but added there was a high level of suspicion about the illness even before a confirmed case was reported.

The information about the date cases occurred is contained on a slide presented at the briefing, released online on Friday.