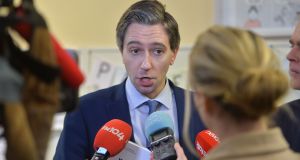 Minister for Health Simon Harris: ‘I know their stories . . . I consider some of them friends’. Photograph: Alan Betson / The Irish Times

Minister for Health Simon Harris has denied he displayed “a lack of empathy” with the women impacted by the CervicalCheck scandal who recently learned they had received incorrect results.

On Wednesday patient advocate Stephen Teap accused the Minister of “a lack of empathy” following a review of more than 1,000 slides carried out by the UK Royal College of Obstetricians and Gynaecologists (RCOG) that highlighted 308 different results to the screening programme.

The report said 159 of those different results led to missed opportunities to prevent cancer or diagnose it at an earlier stage.

Mr Harris told Newstalk Breakfast the experiences of women impacted by the CervicalCheck scandal will stay with him for the rest of his life. Some of the women impacted have become his friends in the months since the scandal broke, he said.

“For the rest of my life I will hold with me the stories and experiences of the women who have been impacted by the CervicalCheck debacle - and their families, their next of kin.

“I have sat in rooms with women impacted for four, five, six hours over a long period of time.

“I know their stories; I know many of them, I consider some of them friends.”

He said that while the RCGO report “showed the devastating impacts of the limitations of screening” it also found the CervicalCheck screening programme is working effectively.

“It did find it was safe. It did find that women could have confidence in it.”

Mr Harris also defended the cost of the national children’s hospital and said the number of children on waiting lists was the reason why so much money was being invested in the new hospital.

He quoted national children’s hospital chairman Fred Barry, who told an Oireachtas committee this week it was “highly improbable” the cost would reach a total cost of €2billion.

While the cost was important, “it will be worth every cent” if it reduces waiting lists, added the Minister.