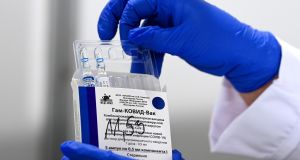 A nurse takes out vials of the Russian Sputnik V vaccine against coronavirus during vaccination at the Arena ‘Boris Trajkovski’ in Skopje, Republic of North Macedonia on Monday. Photograph: Georgi Licovski/EPA

The EU drug regulator will launch an investigation next week into whether clinical trials of Russia’s Sputnik V Covid-19 vaccine contravened ethical and scientific standards.

The European Medicines Agency’s probe into whether Sputnik V trials met “good clinical practice” (GCP) standards comes as people familiar with the regulator’s approval process told the Financial Times of their concerns that they had not been ethically run. GCP is an internationally agreed standard aimed at ensuring that drug trials are designed and conducted properly.

Russia has said military servicemen and state employees were involved in trials of the jab developed by a state-run laboratory and funded by the Russian Direct Investment Fund (RDIF), the Kremlin’s sovereign wealth fund. The Reuters news agency has reported that some who took part described being pressured to do so by their superiors.

Kirill Dmitriev, head of the RDIF, denied the use of coercion, telling the FT: “There was no pressure [on participants] and Sputnik V complied with all clinical practices”. He said the EMA inspection was scheduled to begin next week.

While Russia has pitched Sputnik V as a possible solution to Europe’s vaccine woes, Thierry Breton, the EU Commissioner heading the bloc’s vaccine programme, said last month that Europe had “absolutely no need of Sputnik V”. This sparked claims from Moscow that Brussels was biased against the Russian-made jab.

The EMA is conducting a review of Sputnik V but has yet to make a ruling on whether it can be used in the EU. It has said approval was dependent on clinical trials meeting GCP standards.

“Compliance with this standard provides assurance that the rights, safety and wellbeing of trial participants are protected, and that clinical-trial data are credible,” the EMA said, adding it could order an inspection when concerns were identified. The regulator declined to comment on planned or ongoing inspections, including in Russia.

Dmitriev pointed out that regulators in the 59 countries that had already approved Sputnik V “went through a very rigorous processing of the data and are happy that it complies with GCP”.

The sovereign wealth fund boss continued: “We are not aware of any concerns from the EMA regarding GCP and leaks of such concerns are a specific example of people trying to undermine the EMA approval process which is supposed to be unbiased and without discrimination.”

In addition, a separate EMA inspection of Sputnik V production facilities in Russia that had been scheduled for next month had been delayed by a few days because of the need to accommodate visits from inspectors from countries that had placed orders for the jab, Dmitriev said. “We prioritise people for inspections who have committed to buying vaccines...unlike the European Commission, ” he said.

The EU has faced mounting criticism over its stuttering vaccine programme. The bloc has inoculated significantly fewer people than either the UK or US as a percentage of the population, with officials pointing to a lack of vaccines as one cause.

EU member states Hungary and Slovakia have purchased Sputnik V vaccines using emergency rules, but the Slovak prime minister was forced to stand down last month after his decision to buy the Russian jab sparked a backlash from his own ministers.

The vaccine shortages come as much of the EU grapples with a third wave of virus infections, with cases, hospitalisations and deaths rising in many European countries. – Copyright The Financial Times Limited 2021