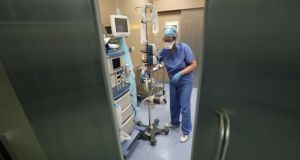 Over the fortnight, 59 patients were hospitalised and three required admission to ICU. Photograph: Nick Bradshaw

Ireland has the joint lowest death rate from Covid-19 in Europe at present, according to new data.

Along with seven other countries, Ireland has a 14-day cumulative death rate of zero per 100,000 population, the latest update from the European Centre for Disease Control shows.

The other countries with a death rate of zero are Austria, Norway, Finland, Luxembourg, Iceland, Cyprus and Liechtenstein.

There have been no Covid-19 deaths in Ireland since mid-August, largely thanks to the near-elimination of the disease over the summer.

However, with transmission rates increasing again, the incidence of the disease has risen again, to 34.7 cases per 100,000 population, according to the ECDC. Ireland has the 11th highest incidence in Europe.

More people are being infected with Covid-19 in the health system currently than from overseas travel, new figures show.

Some 120 people – 51 patients and 69 staff – acquired the virus in a healthcare setting over the past fortnight, the latest report from the Health Protection Surveillance Centre shows.

This compares with 118 travel-related cases notified to the HPSC over the period, a figure that includes people who acquired the disease abroad and those who in turn acquired it from them.

A total of 1,717 cases were identified over the 14-day period, of which the largest category was the 872 people who were close contacts of confirmed cases. Some 387 cases involve community transmission, meaning the source of the infection is not known, while 220 cases remain under investigation.

Only five countries in Europe have a higher incidence than this.

While new cases were recorded in all Irish counties, Sligo had fewer than five, giving a country-wide low incidence of 3.1. The national incidence is 36.06.

Over the fortnight, 59 patients were hospitalised and three required admission to ICU. There were 191 cases among healthcare workers.

No deaths were recorded over the period.

‘Unconscionable’ for healthcare worker not to get flu vaccine, says Reid