Hiqa cancels registration of HSE centre for people with disabilities 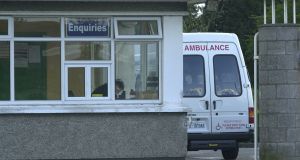 A HSE-run home based in two separate buildings on the campus at Cherry Orchard Hospital has been found in major non-compliance with regulations. Photograph: Cyril Byrne

The healthcare standards regulator has cancelled the registration of a Health Service Executive-run home for people with disabilities based at Cherry Orchard Hospital in Dublin after it found major non-compliance with regulations, including the potential for financial abuse.

The Health Information and Quality Authority published 15 inspection reports on centres for people with disabilities on Tuesday.

It had previously indicated its intention to cancel and refuse the registration of the Cherry Orchard centre because of “institutionalised service arrangements that had a significant impact on the rights of residents and a failure to protect their privacy and dignity”.

During an inspection in January, inspectors found that while there were some improvements, these were at an early stage of implementation and were not yet improving the quality of service delivered to residents.

They continued to find high levels of non-compliance in the centre and Hiqa said it was currently engaging in “escalated regulatory action with the provider”.

The inspection report found institutional-type practices were in place within the centre. “For example, inspectors observed some residents asleep in bed, yet, their bedroom doors were open and other staff members and residents were walking up and down the corridor.”

Residents also did not participate in decisions about their care and consultation with them in relation to the organisation of the centre was also very limited.

They also found that arrangements to protect residents from healthcare-associated infections were not effective.

“Inspectors observed staff members entering into a bedroom where a resident had a diagnosed healthcare infection; universal precautions were not used by staff members before or after leaving the bedroom,” the report said.

A clinical waste bag was placed on a chair in one of the units at 8.45am on the morning of the inspection and remained there at 5.30pm, the inspectors found.

“Measures to safeguard residents were not in place within the designated centre. Inspectors found incidents, allegations and suspicions of abuse at the centre were not appropriately investigated in accordance with policy, national guidance and legislation,” the report added.

“Inspectors identified no action had been taken following the previous inspection where sums of residents’ money were unaccounted for. Inspectors were informed of a new system which was put in place in January, in relation to the recording of residents’ finances. Inspectors requested to see evidence of this, however, the recording book was blank.”

The inspectors identified several potential incidents where financial abuse could have occurred and no action had been taken by the provider.

There were 25 residents in the centre, which consists of two separate buildings on the hospital campus, on the day of the inspection in January.

Of the 15 reports published on Tuesday, six centres were found to have a good level of compliance with the regulations and standards, including centres operated by Brothers of Charity Services Ireland, Peacehaven Trust and Sunbeam House Services.

Non-compliance with the regulations and standards was found in nine centres, including a St John of God Services centre in Kildare.

Hiqa has required the provider of one centre run by Stewarts Care Limited to engage in a six-month improvement plan and are monitoring the implementation of that plan and its impact on the safety and quality of life of residents.

The watchdog also said management systems in place in an Acquired Brain Injury Ireland (Peter Bradley Foundation) centre were not responding to regulatory failings in a timely way.