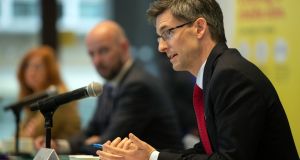 A further 61 confirmed cases of Covid-19 have been reported by State health officials but no new deaths.

This brings to 27,969 the total number of cases of the coronavirus disease. The death toll from the virus remains at 1,777.

There were 119 new cases in Northern Ireland, bringing total cases there to 6,766. There were no further deaths, leaving Covid-19 fatalities at 559.

Just over two-thirds of the newly infected people are under 45 years of age, and 23 are confirmed to be associated with outbreaks or are close contacts of a confirmed case.

Some 16 cases, or one in four of the new cases, are identified as community transmission.

Dublin accounts for the highest number of cases with 39, followed by 13 in Kildare. The remaining nine cases are spread across Cork, Kerry, Laois, Limerick, Longford and Wicklow.

On Saturday it was confirmed that a female prisoner had tested positive for Covid-19. It is understood the woman (23), who is the first prisoner to test positive for the virus, has been in quarantine since she was taken into custody on August 13th.

The State’s acting chief medical officer, Dr Ronan Glynn, said on Sunday he knew that at times people could “feel powerless against Covid-19” but this was not the case.

“Each of us has a range of simple tools at our disposal – knowing the risks, washing our hands, not touching our faces, keeping physically distant, avoiding crowds, limiting visitors to our homes and wearing a face covering,” he said.

He added that “the most powerful tool of all remains our solidarity with one another. By encouraging each other to stick with the basic measures and by continuing to act and adapt together we can suppress the transmission of this virus once again.”

There were six confirmed Covid-19 cases and six suspected cases of the disease in critical care units as of 8pm on Saturday night.

The event had “very clearly cast light” on the recommendation that adults must stop congregating in large groups, “whether it be on the sidelines of a match or in a large group in a hotel so that we don’t transmit the virus between households”, he said.

Prof Nolan said he could offer “a great deal of assurance” to parents and teachers worried about schools reopening, noting that there was “very little evidence internationally that schools are a major site of transmission”. Most children contracted the virus at home, he said.

Asked about outbreaks in at least 41 schools in Berlin two weeks after its schools reopened, Prof Nolan said more than 90 per cent of the city’s schools remained open and that in almost every case, there was no evidence of the disease being acquired or transmitted within the school.

The 14-day incidence rate of Covid-19 cases in Ireland fell to 25.8 per 100,000 population on Sunday, down from 27 on Friday, according to the European Centre for Disease Control.