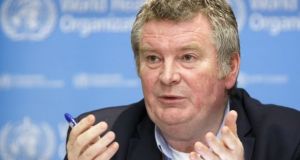 Dr Mike Ryan said at a WHO briefing on Monday night that not everyone had the knowledge or interest in adhering to regulations.

Europe needs “serious acceleration” in the fight against Covid-19 as it has fallen “well behind this virus”, World Health Organisation (WHO) head of emergencies Dr Mike Ryan has warned.

Stringent lockdowns could be avoided if people quarantined when required but the challenge was that “not everyone is doing that” or had the knowledge or interest in adhering to regulations, the Irishman told a WHO briefing on Monday night.

His comments were echoed by chief medical officer Dr Tony Holohan who said people with Covid-19 and contacts needed to act fully in accordance with advice.

“There are too many stories of people with symptoms/waiting on tests and not self-isolating, also contacts not restricting movements,” according to Dr Holohan.

Urging people to “spread the message, not the virus”, he said self-isolating meant staying indoors completely and avoiding contact with all other people.

Anyone waiting for a Covid-19 test or test result must self-isolate for 10 days and those they live with or close contacts of a case must restrict their movements for 14 days, he said.

Inside Politics · A dramatic week in Covid, Brexit and the US election

While the situation continued to deteriorate in many European countries on Monday, there was evidence in Ireland of a slight improvement in Covid-19 trends.

The number of new cases went below the 1,000 a day mark on Monday and the five-day average continued a slight downward trend.

The 939 cases reported on Monday brings to 58,067 the total number of cases of the disease in the Republic. A further three deaths were also reported.

With 26 admissions over the previous day, the number of hospitalised patients increased to 344 on Monday.

Long-term exposure to air pollution is a factor in 8 per cent of Irish Covid-19 deaths, an international modelling study has estimated.

At least 150 Covid-19 deaths in Ireland are linked to air pollution, it suggests. Air pollution may aggravate other health conditions and lead to fatal outcomes for Covid-19 patients, the authors say.

Meanwhile, a study showed 18 per cent of healthcare workers at Tallaght University Hospital have antibody evidence of infection with Covid-19 – much higher rate than the 1.7 per cent of the general population who are estimated to have antibodies.

In Belgium, officials warned intensive care units could be overrun in a fortnight if current rates of infection continued, and doctors in Liege have been asked to keep working even if infected with Covid-19.

Italy warned its citizens against travelling to other European countries, while German chancellor Angela Merkel has reportedly warned colleagues it was on the verge of losing control of its fight against the virus.