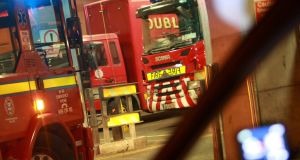 There has been a significant and steady decline in the number of fire fatalities over the last 15 years since the initiation of community fire safety programmes. File photograph: Nick Bradshaw.

Alcohol is a factor in more than half of all fatal fires in homes in Ireland, according to a new study by the Health Research Board.

The research, which examined 101 domestic fires between 2014 and 2016 that resulted in 106 fatalities, found 51 per cent of all victims had alcohol in their blood.

Data obtained from coroner reports found almost two-thirds of victims who had consumed alcohol had a blood-alcohol concentration over three times the legal drink-driving limit.

The HRB said such a level of alcoholic consumption reduced a person’s ability to respond to a fire as it affected their balance and coordination and could result in a possible loss of consciousness.

The research also found older people, single people, men and those living in rural areas were at a higher risk of dying in a house fire.

In particular, it found people aged over 65 were over-represented among casualties of domestic fires.

More than half of all victims of domestic fires were in this age group, even though they only account for approximately 20 per cent of the general population.

Almost 80 per cent of fatalities were single people, while 69 per cent of victims were alone at the time of the fire.

The research also showed that farmers and agricultural workers were disproportionately represented among fire victims as they accounted for 1 in 5 of all deaths, despite census data showing they represent only 3 per cent of the population.

Most fires started in the living room followed by the bedroom. The most common time of fatal fires to start was between midnight and 2am.

Coroners’ data also recorded that 1 in 3 people who died in domestic fires were smokers and it was “highly probable” that they were smoking around the time of the fire.

HRB chief executive, Darrin Morrisey, said there had been a significant and steady decline in the number of fire fatalities over the last 15 years since the initiation of community fire safety programmes.

“This new HRB research is designed to support the development of evidence-based policies to reduce the number of fire-related deaths in Ireland and increase awareness among those most at risk, especially older people and/or those living alone and in rural locations,” said Mr Morrisey.

He claimed the reduction in fire fatalities had also been helped by the increased use of domestic smoke alarms.

HRB researcher and one of the study’s main authors, Anne Doyle, said campaigns on fire safety needed to be specifically targeted at those most at risk, especially the elderly and those living alone particularly in rural locations.

“Those who prescribe and/or dispense medications should be educated on advising patients on dangers of mixing alcohol with prescription medications,” she added.