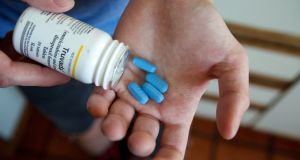 Medication preventing HIV infection is to be rolled out through the public health service from the start of next month, the Government has announced.

A programme for PrEP, a combination of pre-emptive antiretroviral drugs which help prevent the contracting of HIV, will be offered through the health service from November 4th.

The new programme means that those who attend an approved service and are found to be at substantial risk for HIV will be eligible for PrEP at no cost.

It will initially be available in several STI clinics and hospitals, with €5.4 million allocated in Budget 2020 this week for the full rollout of the programme next year.

Taoiseach Leo Varadkar said the introduction of the programme “will reduce the number of people who contract HIV in future”.

The full PrEP treatment (pre-exposure prophylaxis) will involve the pre-emptive use of antiretroviral medication and regular monitoring and testing, as well as advice and counselling on safer sex practices.

A health technology assessment of the drug by the Health Information and Quality Authority (Hiqa) found PrEP is safe and highly effective at preventing HIV in people at substantial risk, and also found the introduction of a PrEP programme would be cost-saving.

Several LGBTQ+ organisations had campaigned for the medication to be available through the public health service in recent years.

Minister for Health Simon Harris said the introduction of the programme was a “really important milestone”, and that PrEP would “save lives”.

“For decades we have confined conversations about HIV to the shadows. Those living with HIV have felt stigmatised and shamed; today, all that changes,” he said on Thursday.

Dr Fiona Lyons, consultant in HIV medicine at the St James’s Hospital STI clinic, welcomed access to the medication “without charge to those who are at substantial risk of acquiring HIV through sexual contact”.

Dr Lyons said PrEP was an “important part of the HIV prevention jigsaw puzzle” which should reduce the number of new infections.

In recent years the rate of new HIV diagnoses has increased in Ireland. In 2018 there was 531 new cases recorded, an 8 per cent increase on the previous year, according to figures from the Health Protection Surveillance Centre.

Male-to-male sexual transmission accounts for more than half of cases, and an estimated 7,000 people are living with HIV in Ireland.

Information on the availability of PrEP can be found at www.sexualwellbeing.ie/prep