Fears over new legislation on opt-out sytem of organ donation 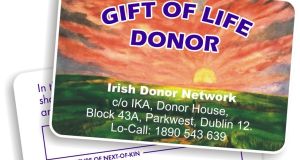 The Irish Kidney Association believes the new law may not increase the number of donors across the country.

A proposed new law which would introduce an “opt-out” system of organ donation is “misleading” and will remove the “prompt” for family conversations on the topic, an Oireachtas committee will be told on Wednesday.

The chief executive of the Irish Kidney Association Mark Murphy is expected to tell the Oireachtas Committee on Health that the new law may not increase the number of donors across the country.

The new system will presume consent unless the deceased, while still alive, had specifically stated they did not want to donate organs. There will be a “soft” element to the change, in which the next-of-kin is still consulted and, if they object, the donation does not proceed.

“In putting an emphasis on a ‘soft opt out with family consent’, this Bill is misleading the public as it implies a change of practice whereas the reality is that it actually stays the same,” Mr Murphy is expected to say.

“Currently, a potential organ donor is identified, the family is approached and consent for retrieval is given or not. Under the proposals in this Bill, the public will have the opportunity to opt-out of organ donation.

“ If they do not opt-out they will be considered potential donors but the family will still be approached for final consent – where’s the difference. We want people to say yes to organ donation but just as importantly, we want their families to also say yes. How do we do this? We encourage conversation.”

He will say that public “will only look at the headlines of this Bill” which will eventually “remove the call to action” and “remove the prompt for family conversation.”

“Don’t just take my word for it, there are people a lot more learned than myself who will tell you that the introduction of an system of opt-out will not affect growth in deceased donors.”

Principal officer in the Department of Health Michael Conroy will tell the committee that as of the end of September, 577 people were on transplant waiting lists in Ireland, 499 of whom were on the kidney transplant list. The plan is to have the Bill enacted into law by the end of next year, he will say.

The Irish Donor Network, which supports the new legislation, will tell the committee that the ambition to make more organs available for transplant under such a system “may be blunted or not reach full potential if it is not accompanied by the necessary supporting resources and infrastructure.”