Loyalty cards and other drinks promotions to be banned in 2021 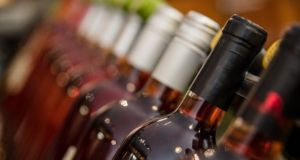 As well as a ban on loyalty card programmes that reward alcohol purchases, the Minister also proposed a ban on the sale of alcohol products at a reduced price. Photograph: iStock

Loyalty card programmes and retail promotions that encourage alcohol consumption are to be banned, but not until 2021.

The measure advanced by Minister for Health Simon Harris is aimed at reducing harmful binge-drinking and making alcohol less affordable for young people.

The planned introduction of minimum unit pricing for alcohol, another measure aimed at tackling problem drinking, is also being delayed. Attempts to introduce it on an all-Ireland basis have been stymied by the lack of a functioning administration in Northern Ireland.

Earlier this year, Mr Harris notified the European Commission of his plans to introduce regulations provided under the Public Health (Alcohol) Act, as required under the technical standards directive.

As well as a ban on loyalty card programmes that reward alcohol purchases, the Minister also proposed a ban on the sale of alcohol products at a reduced price or free of charge when another product or service was purchased, and a ban on short-term price promotion of three days or less on drink products.

Under the EU assessment, two comments were received. The European Commission asked whether the regulations applied to online sales; they do. Spain claimed the regulations were anti-competitive, but did not submit a detailed opinion.

As a result, the standstill period ended earlier this month, leaving Mr Harris free to make the regulations.

He had already indicated his intention to provide for a one-year lead-in time for the regulations so that businesses have time to prepare for the changes. This has been extended to January 11th, 2021 because, according to the Minister, Christmas is the busiest time of year for retailers so “it may be perceived as unreasonable” to apply them in December 2020.

“Alcohol is not an ordinary grocery product. By restricting access to alcohol products through promotions or loyalty card programmes, the regulations align with the objectives of the Public Health (Alcohol) Act 2018, which are to reduce alcohol consumption and reduce the harms caused by the misuse of alcohol.

“Alcohol is a drug and one which has real risks and harms associated with it and as such, should not be a subject of promotional activity.”

On minimum unit price, Mr Harris said it remained the Government’s policy to enact these provisions at the same time as similar measures are introduced in Northern Ireland.

“We could then agree to do it on the same date. However, we cannot wait forever. If it does not prove possible to adopt the approach I have set out, we may need to go ahead with the introduction of minimum unit pricing unilaterally.”