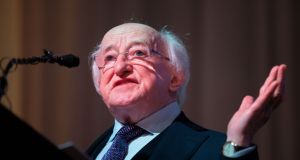 Áras an Uachtaráin said on Thursday that President Michael D Higgins had signed the Bill on abortion and it had become law. File photograph: Tom Honan

A Bill that will give women access to abortion for the first time in the history of the State has been signed into law by President Michael D Higgins.

A statement released by Áras an Uachtaráin on Thursday evening said: “Having considered the Health (Regulation of Termination of Pregnancy) Bill 2018, the President has signed the Bill and it has accordingly become law.”

The Bill finished its final stage in the Seanad earlier this month after weeks of sometimes heated debate in both the Dáil and Seanad. It follows a referendum in May on the removal of the Eighth Amendment from the Constitution, which guaranteed the unborn and mother an equal right to life. Some 67 per cent of the electorate voted to repeal the amendment.

Minister for Health Simon Harris will now have to sign a number of statutory instruments to give effect to the Bill now that it is signed into law by the President.

The Bill was signed by the President as the Medical Council deleted provisions from its code which will mean that no ethical guidance on performing abortions will be in place for doctors when the legislation comes into force next month.

Having considered the Health (Regulation of Termination of Pregnancy) Bill 2018, the President has signed the Bill and it has accordingly become law.

The council took the decision to delete four of the five paragraphs dealing with abortion from its guide on professional conduct and ethics because they conflicted with the Health (Regulation of Termination of Pregnancy) Act.

The decision was taken at a specially convened meeting on Wednesday night. The council is updating the ethical guide but this process will not be ready in time for the introduction of abortion services on January 1st.

Two of the four deleted paragraphs state that a doctor has an ethical duty to make every reasonable effort to protect the life and health of pregnant women and their unborn babies; and that in exceptional circumstances, it may be necessary to terminate the pregnancy to protect the life of the mother while making every effort to preserve the life of the baby. The other two deal with situations where there is a real and substantial risk to the life of the woman, and the provision of information for abortions abroad.

The council plans to write to all 23,000 registered doctors in the State to inform them of the changes to the guide.

“We are currently engaging in a very comprehensive process to update the Medical Council guidelines having only recently closed a consultation with doctors and key stakeholders in which over 1,400 responses were received,” said Dr Suzanne Crowe, chair of the council’s ethics working group.

“Today’s announcement ensures that our ethical guidance is not in conflict with the new legislation and provides reassurance to doctors who are involved in delivering this service.”

Aside from the paragraphs on abortions, sections of the guide dealing with “dignity of the patient”, “equality and diversity” and “conscientious objection” are being reviewed.

Once a new wording is finalised, the council will again consult with doctors and other stakeholders, but this would not happen before the legislation comes into force, Dr Crowe said.