Abortion services will be ‘unrecognisable’ in year’s time – Peter Boylan 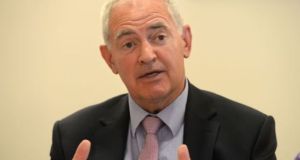 The abortion services put in place from January 1st will be “unrecognisable” in a year’s time once they are up and running, the clinical adviser to the Health Service Executive on the introduction of the service, Dr Peter Boylan has said.

Dr Boylan, a former master of the National Maternity Hospital, was asked on Sunday whether he believed the planned services would be operating from next month.

The Regulation of Termination of Pregnancy Bill finished its final stage in the Seanad on Thursday night after weeks of debate in both the Dáil and Seanad.

The Bill, which will give women access to abortion for the first time in the history of the State has gone to President Michael D Higgins to be signed into law.

Speaking on RTÉ’s This Week programme, Dr Boylan said a “huge amount of work” had been done, both by the medical profession and by the HSE, to get the service into place.

“It will be up and running but I think in a year’s time it will be unrecognisable from what it will be in January,” he said.

Dr Boylan said this was a “completely new service” and something that people had not handled before.

“There is understandable nervousness about it and there are a lot of difficulties as we know with infrastructural deficits in the Irish healthcare system. But this is a major improvement for Irish women’s health, where they won’t have to travel anymore.

“The people voted, it’s law. It will be law, provided that the President signs it in and the Minister signs off on whatever he has to sign, so it will be legal. It will be very difficult to say to women ‘look, I’m sorry, you’ve got to go to England or you’ve got to travel’. And women will expect this service to be in place.”

Dr Boylan noted the legislation would have an impact on more than just women in crisis pregnancies, because it extended to those carrying a baby with a fatal foetal abnormality and to women who were very sick but where their life was not under a real threat.

“So there is a very extended sort of service coming in,” he said.

Dr Boylan said there had been a lot of concentration on the provision for terminations up to 12 weeks’ gestation because this was a “huge cultural change” for Ireland and a huge cultural change for the medical profession and hospitals.

“But if we develop a service like the way it is, say in Norway, where more than 90 per cent of women will have early terminations in the community, in that group, at less than nine weeks. So as the service evolves one would hope that that’s the way it would go in order to look after these women.”

Dr Boylan said his understanding was that there were plenty of GPs available to make this service available to women up to 12 weeks pregnant, with “a good geographic spread around the country”.

He said a 24-hour, seven-day helpline would be operational on January 1st. A woman could phone that to find if there was a GP listed locally who was willing to provide the service.

Dr Boylan said that in smaller communities, a lot of women might prefer to travel to Dublin or another area for reasons of confidentiality.

“There may be some degree of travel, but the important thing is that women won’t be travelling outside the country, using Ryanair and Aer Lingus and all the expense and so on that’s involved with that,” he said.

In the case of people dealing with a fatal foetal abnormality, Dr Boylan said most termination procedures would probably take place in the major hospitals, probably in Dublin, Cork and Galway.

Dr Boylan said someone in those circumstances may choose to go back to her own community to be close to friends and family.

“But she won’t be feeling like a criminal anymore and she won’t have to travel.”

1 US election: ‘Trump would not be caught dead here unless he wanted our votes’
2 Storm Aiden prompts nationwide weather alerts for Halloween
3 The real Contagion virus is out there and it’s causing virologists to worry
4 First full moon on Halloween night since 1955 will be rare ‘blue moon’
5 ‘Clothes are not essential’: Damien English defends retail restrictions
Real news has value SUBSCRIBE