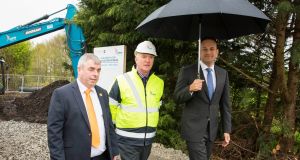 Extreme weather events, such as the recent storms Emma and Ophelia, invariably expose critical weakness in infrastructure, especially in the most populated cities and towns. Nowhere is that more obvious than in dealing with widespread flooding.

The programme of flood defence works announced by the Government on Thursday is the first time a national co-ordinated response to that threat has been put in place.

It will see an estimated €1 billion spent on 118 flood-risk management schemes, including 50 priority flood-defence schemes in some of the country’s at-risk locations. It’s the culmination of almost 10 years’ work, and begins a process of ensuring the most vulnerable areas are protected.

Such a strategy is urgently required as the climate change clock is ticking at an accelerating rate. Devastation caused by recent flooding prompted two immediate priorities, according to Taoiseach Leo Varadkar: improve the co-ordinated response to flood events, and ensure better long-term planning in assessing and managing flood risk.

Since 2012, a total of 300 sites were surveyed as part of Ireland’s largest study on flooding under the Catchment Flood Risk Assessment and Management Programme (CFRAM) study, overseen by the Office of Public Works. It concludes it is feasible to provide protection to 95 per cent of properties assessed to be at significant flood risk.

Progressing these initial 50 flood-relief schemes, together with those 75 schemes already complete and under way, will protect 80 per cent of 34,500 properties assessed at having a 1 per cent chance of experiencing a significant flood event in any year – ie a one-in-100-year flood event.

A new website – www.floodinfo.ie – provides detailed flood maps and a summary of measures set out in flood-risk management plans, which can be viewed by region (they are based on 29 major river basins, where two-thirds of the population is based).

It enables businesses, communities and householders to see what is proposed for their area and to respond to a particular flood risk. It’s also a resource to support planning and emergency responses by local authorities and national agencies.

A 2017 Environmental Protection Agency report by Dr Margaret Desmond of UCC Environmental Research Institute predicts changes in frequency of extreme weather events in Ireland; notably fewer but more intense storms which are likely to be exacerbated by sea level rise. Annual rainfall is also set to increase with larger increases in the western half of the country.

Dr Desmond says the plans are the first opportunity to implement large-scale adaptation to climate change in Ireland.

They should now be put through detailed “climate risk assessment”, she suggests. In addition to structural solutions, they include welcome “natural, green options” such as restoring wetlands and providing water retention areas. Other “enablers” to ensure a better response are improved flood forecasting; property protection by way of insurance for those in high-risk areas, and building community resilience.

“We have already seen changes in the timing of floods. Recent events have highlighted the volume of work that is needed. It’s important that infrastructure being built now is designed to account for future increases in flood risk over the coming decades,” he says.

The OPW is factoring in climate change, he accepts, “but it’s critical as plans are updated that they take account of the best-available science on climate change. While most of the announcements refer to structural engineering works, the development of catchment-based flood management plans are to be welcomed; viewing flooding as a catchment problem with room to include natural flood-reduction measures”.

Planning, rather than engineering, “remains the most important tool at our disposal for managing present and future flood risk”, he adds.

The risk management plans mark a new proactive way of responding to flooding, explains Mark Adamson of the OPW’s Flood Relief and Risk Management Division who was closely involved in the CFRAM process. In the past, flood defence schemes were planned on an individual basis, and often in reaction to a flood. By developing computer models, they were also able to factor in future scenarios and to evaluate how sea level rise might impact on catchments. Flood risk management plans mean the country is better equipped to respond to extreme flooding.

But climate change may mean the level of funding set aside is insufficient. Hard choices will be necessary and difficult decisions will have to be taken beyond “do not build in areas likely to flood” while protecting some areas will not be possible.