Gulf Stream slowing down is bad news for Ireland 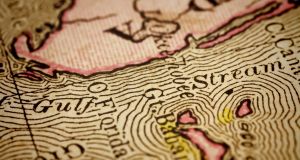 Ireland lies relatively far north in the Atlantic so the Gulf Stream’s gift of more temperate waters matters hugely to our climate.

‘All Ireland is washed by the Gulf Stream,” said Stephen Dedalus in the opening chapter of Ulysses. He might have added warmed to washed.

Ireland lies relatively far north in the Atlantic so the Gulf Stream’s gift of more temperate waters matters hugely to our climate, as does their interaction with the atmosphere to produce the sea surface temperature. This oceanic movement of waters is known scientifically as the Atlantic Meridional Overturning Circulation (Amoc). It brings warm and salty water from the Caribbean region in a northeasterly current towards the Nordic Seas.

As Summer K Praetorius goes on to explain in the April 11th issue of the scientific journal Nature: “In the chill of winter, these waters cool and descend with the heavy load of their salinity. This deep convection is a key part of the Amoc which can be thought of as an ocean conveyor belt that releases heat to the atmosphere above the North Atlantic Ocean before travelling through the abyssal ocean to resurface in other areas of the world.” The process is linked to and replicated throughout the world’s oceans by the deep colder waters that travel past North and South America.

Praetorius makes these points in introducing two startling research papers on Amoc and the Gulf Stream which show it has slowed down by about 15 per cent. That is the equivalent to the loss of water produced by 15 Amazons or three times the effect of bringing all the Earth’s rivers and streams to a stop. It is the biggest change we know about for 1,600 years.

Previous research has shown such changes can be abrupt and have major effects on climate. On one calculation, there have been 25 shifts from colder to warmer waters over the last 115,000 years. One leading oceanographer, Prof Stefan Rahmstorf, at the Potsdam Institute for Climate Impact Research in Germany, said that “from the study of past climate, we know changes in the Amoc have been some of the most abrupt and impactful events in the history of climate”. During the last Ice Age, winter temperatures changed by up to 10 degrees within three years in some places.

The first paper by Caesar, Rahmstorf et al examines changes in the sea surface temperatures in the subpolar gyre – the cyclonic system of wind-driven ocean currents that lies to the south of Iceland – and links them to the latest models of climate change showing the effects of increased atmospheric carbon dioxide. This gives them the 15 per cent estimate, which they also link with how climate change affects Greenland’s ice sheet by adding fresh water to the surface ocean and reducing the density of the water driving the deep convection conveyor belt. They conclude that the slowdown in the Amoc is probably a response to warming caused by human greenhouse-gas emissions.

The second paper by Thornalley et al is more bottom-up in its approach, using proxy measurements of the deep-sea sediment grains cores reflecting the speeds of the bottom waters along the path of Amoc’s deep-water return flow. This gives them a picture of change over the last 1,600 years. A stable period from AD 400 to 1850 weakened thereafter, coinciding with the end of the “little Ice Age” in Europe from 1300. Their work puts more emphasis on climate variability than on human-induced change. But the striking similarity of their finding about Amoc’s slowing-down and its potential effects on Europe’s climate is chastening in light of Ireland’s recent experience of hurricanes and blizzards.

This research shows vividly that the natural history of our climate is non-linear, contains tipping points which could dramatically affect living conditions and is linked to human-induced changes that can be reversed if we are sufficiently determined to act fast enough.

That these studies have attracted so little media attention in Ireland is really surprising given our direct exposure to the Atlantic and how it affects our climate. They should be a spur to combat the complacent official approach towards Ireland’s weakening record on climate change action.

Mention of subpolar gyres and sudden change recalls WB Yeats’s references to these swirling vortexes in The Second Coming: “Turning and turning in the widening gyre  The falcon cannot hear the falconer;  Things fall apart; the centre cannot hold;  Mere anarchy is loosed upon the world,  The blood-dimmed tide is loosed, and everywhere  The ceremony of innocence is drowned;  The best lack all conviction, while the worst  Are full of passionate intensity.”

1 Google tells workers to return to country where they are employed
2 Covid-19: One death and 363 further cases confirmed in State
3 ‘Insane’ gathering of hundreds of students in Galway condemned
4 H is for hero: the origin story of Jack Reacher, a billion-dollar brand
5 Paul Krugman: Trump’s Debt, His Future and Ours
Real news has value SUBSCRIBE