Miriam Lord: US gets glimpse of ‘Global Ireland’ that borders on the incomprehensible

Slick production tells US audience about the best of Ireland. ‘What about it?’ asks one viewer

A new video showcasing Ireland as a place to live, visit, work, study and invest in has been released ahead of St. Patrick's Day. Video: MerrionStreet.ie 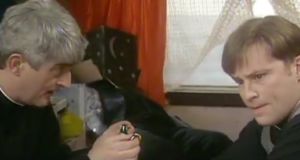 As for gifts, it’ll probably be the usual assortment of linen and books and a little something in silver.

Or maybe Leo might surprise Donald with a border terrier pup when he visits this morning.

It would be uncontroversial company for president Trump when Melania is absent, while reminding him of that nice young man who came to visit for St Patty’s Day and invited him over to his home country of Iceland to inspect its internal border. The guy wasn’t blonde, like all the other Icelanders, but he sure had a great Viking name: Varadkar.

On the eve of his first official White House visit to meet the US president, the Taoiseach revealed that Donald Trump expressed an interest in visiting the Irish Border when they spoke on the telephone last year. The president has a big interest in borders and flew out to California this week to inspect various design samples for the wall he has pledged to build along the Mexican border.

The gift of a puppy would also stop people complaining that Trump has broken the long tradition of keeping a pet in the White House. And if the dog were Irish-bred, it would be a constant reminder of Varadkar’s standing invitation to come visit the Border some day.

That some day could be soon, with the next presidential election just around the corner in 2020 and a visit to Ireland always good PR for an incumbent seeking re-election. It would be a wonderful coup for Leo Varadkar in the midst of his Brexit resistance campaign with Britain over the possible reintroduction of a hard border between Ireland and Northern Ireland.

The only downside to presenting a border terrier pup might be that the Oval Office is just too small to have two of them in situ at the same time.

One way or the other, the Taoiseach is going to invite Trump to Ireland: “The invitation that Enda Kenny made to Donald Trump stands.”

He was speaking following a meeting with the US Chamber of Commerce before heading off for lunch with the Irish-American business community. This has become an annual event during St Patrick’s week and is held in the pristine white halls of the US Institute of Peace.

The different state enterprise agencies operating in America entertain many of their clients at the lunch and the Taoiseach of the day makes a speech about how Ireland is a great place for doing business and getting better all the time.

There was a marked similarity between the launches that took place at the event last year, when then taoiseach Enda Kenny kicked off the “Creative Ireland” marketing campaign spearheaded by John Concannon, who moved on to head up Leo’s much criticised Strategic Communications Unit.

He was at last year’s lunch and keeping a very high profile. He was apparently at the lunch yesterday, but we didn’t see him.

The main part of yesterday’s offering was the screening of a snazzy new video, with a flowery narration which didn’t mean very much.

Project Ireland 2040, also got a big shout-out from the Taoiseach. It came from the man who gave us Creative Ireland. And yesterday’s version.

“Global Ireland” declared Leo, “is how Ireland will tell our story, but in a more unified, compelling, coherent way.”

He said its first campaign is called: “Ireland, here we live.”

Leo told his audience of business movers and shakers that the Global Ireland brand “provides a facility for a company like yours to easily make contact with Team Ireland International” and it shows how “our brand is an essential part of how we build relationships and how we advance our political and economic objectives around the world”.

Then the video rolled. The Taoiseach seemed impressed, but then he wasn’t around last year so this was the first time he saw the generic video.

By the way, Global Ireland, according to whoever wrote Leo’s script, is “who we are, where we come from and what we stand for”. Not forgetting “here we live”.

The video was a feast for the eyes, a rush of exciting images cut from all aspects of modern Irish life. It would impress native viewers, but the people from outside Ireland it was designed to impress won’t have been able to make head nor tail of it.

It began beautifully, with waves crashing against towering cliffs, desolate cliffs and the words: “Here, we find ourselves. We speak and words mostly matter.”

There were glimpses of the Irish rugby team, a fleeting moment from a cherished Father Ted gag, shots of galloping calves and flying geese, microscopes, the Book of Kells, a frame of Dolores O’Riordan, a touching few seconds from the Late Late Toy Show, a bit of a citizenship ceremony, a few irreverent lines from Tommy Tiernan about Lent and St Patrick’s Day over pictures of Panti Bliss and the day the marriage equality referendum was passed and, of course, an audio dollop of Michael D.

“We are out on our own yet never alone.”

“We are a tiny island with a massive heart.”

“We love life and we know life is for living. Ireland. Here we live.”

And there you are now.

Perhaps the American audience loved it. We spoke to a strategic communications expert (he worked for Obama) after the screening. He wasn’t impressed at all.

He saw a lot of style, but little substance.

What was with the rugby, he wondered. It’s a niche sport. And the rest of the video? Did he recognise all the references? Never heard of Panti, no idea about the Toy Show, never saw Father Ted, not au fait with Lent, and so on.

As he saw it, the script was outlining some of the great things about Ireland, like the youthfulness of the population and the size of its young and educated workforce. “But what about it? So you have all of these great things. Why is that good and what advantage does it bring to us? I learned nothing and don’t know what the message was supposed to be.”

Meanwhile, the Taoiseach got ready to do an interview with the Wall Street Journal. Margaret Brennan from Bloomberg news was at his table for lunch.

And then the bread and butter stuff. After the speeches and the food, a long line of men and women waited at a door off the main hall. You could see camera flashes from down the corridor. Secret service men hovered nearby.

The Taoiseach hadn’t yet left. Instead, he was in a room, having his photo taken with guests, one after the other for photographs which, no doubt, will be framed and hung on office walls.

It has to be done.

It’ll be interesting to see how Leo gets on, and if Donald decides to accept the invitation.

Back home, the reaction will be bordering on hysterical if he does.