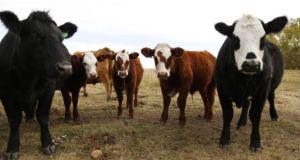 Any farmer who takes part in the blockading of meat factories will be “immediately expelled” from the Beef Plan Movement, the group has said.

The group was speaking after the owners of up to a dozen meat plants were granted temporary High Court injunctions halting blockades of their factories by farmers dissatisfied with the result of recent talks between the industry and farmers.

Beef Plan Movement led pickets outside plants earlier this summer in a row over beef prices, but withdrew those protests in advance of the talks. An agreement was reached, but was not endorsed by the members of Beef Plan Movement.

Subsequently, a number of fresh pickets have occurred at meat factories, which has raised concerns ahead of the visit of a Chinese delegation in the coming days to carry out inspections of factories with a view to increasing exports to the Chinese market.

Beef Plan Movement spokesman Dermot O’Brien told The Irish Times the injunction was “heavy-handed” and “regrettable” but added it was “imperative the protests be quelled” ahead of the visit of the Chinese.

“Farmers understood that what they were doing was the right thing, but blocking entrances to factories is not right either,” he said. “That’s not a peaceful protest.

“It wouldn’t be aesthetically pleasing for the Minister or for Meat Industry Ireland. It was imperative from that point of view to make sure these protests were quelled and that an injunction was in place to remove the protests.”

Mr O’Brien said Beef Plan Movement had “unequivocally and unconditionally withdrawn” all protests, and made it “crystal clear” to members that anybody found to have taken part would be “gone immediately”.

“Anybody who participated in any of these protests would be immediately expelled from our organisation as it would be viewed as an act of gross misconduct,” he said. “The protests that did take place have been by individual farmers.”

Earlier, in the High Court, Lyndon MacCann SC, counsel for Dawn Meats, and Brian O’Moore SC, for Anglo Beef Processors (ABP) told Mr Justice Senan Allen that the actions of the protestors could jeopardise the deal with China.

They said the potential new deal with China had taken years to set up and, if cancelled because of the actions of protesters, could take several more years of negotiation to put it back in place, if at all.

Mr MacCann said trucks delivering carcasses and animals to Dawn Meats had either been unlawfully denied access or were significantly delayed in making deliveries. He said Dawn was suffering a daily loss of turnover of €1.5 million.

Mr O’Moore said a particular worrying aspect of the blockades was intimidation and abuse of suppliers and staff. “Some hauliers have been advised not to return and one was told his company would be burned out if he did return,” he said.

Judge Allen said he was satisfied to restrain the named protesters, or anyone acting in concert with them, from impeding, instructing, hindering or in any way interfering directly or indirectly with access to or egress from all of the two meat companies plants.

The proceedings, which were heard in the absence of the defendants, was adjourned until Friday.

Talks last week were held on the condition prices would not be part of the discussions.

On Tuesday, IFA president Joe Healy said “further talks on the basis that beef price cannot be discussed and without money on the table from Minister [Michael Creed] would be a complete waste of time.”

Mr Healy added that as market conditions had improved in Europe, “there is now room for a price increase – the factories should move on this now”.

“We are less than 70 days from Brexit. We need the Minister and the EU to spell out what they are going to do to support farmers through Brexit,” he said.

Protests over beef prices in recent weeks closed some 20 meat processing plants across the State before the talks, which were hosted by the Department of Agriculture.

The talks had included Meat Industry Ireland (MII), the representative body for processors, the IFA, the Minister for Agriculture and representatives from Beef Plan Movement.

In the last two days, meat processors have issued several Beef Plan directors with fresh legal letters, with representatives for the plants stating they still believed the organisation was behind the recent pickets.

Enda Fingleton, one of the organisation’s directors, reiterated the group was “sitting back,” and had no role in the pickets.

Mr Creed needed to bring retailers to a new series of talks, as a key element of the beef market, who had not been at the previous negotiations, he said.

The IFA had contracted an economist to examine the beef supply chain, from the time it leaves the farmer to when it is bought by customers, Mr Healy told RTÉ’s radio News at One.

“So the processor and the retailer - there are a lot of questions to be asked there and to try and figure out a way of passing on more of that consumer euro back to the farmer,” he said.