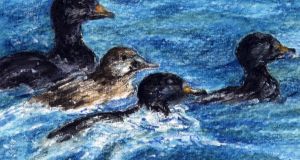 The far lake behind the shore is “David’s lake”, cradled between the sandy machair and a land cliff dark with ivy.

After a long life in ornithology, David Cabot writes big, authoritative books for scientific naturalists. His major study of wíldfowl a few years ago, however, also showed his feelings for the migrant birds that splash down in autumn to the water below his house.

“A flock of wigeon, whistling and growling, wheeling over marshland; the rapid swerving and twisting flight of a pack of teal; the October arrival of whooper swans, low across the sea, fresh from Iceland.” Such sights and sounds, he wrote, “raise hairs on the back of my neck”.

These personal thrills have also sustained the scores of voluntary observers who, for some two decades, have tracked the abundance of wintering waterbirds at estuaries, rivers, lakes, turloughs and callows.

Together the wetlands hosted 757,910 waterbirds in the five years to 2016, most of them marked by a continuing decline. Among the 19 waterbird species, the numbers of a lot of ducks have now halved. All but one of the waders have followed suit. But when it comes to reasons and the pressures and threats to species, the report offers fascinating insights into the changing world of migrant wildfowl and shorebirds.

A disappearing migrant swan gave an early hint of the impact of climate change. The rather dumpy, goose-like Bewick’s swan, once reckoned the most abundant of Ireland’s visiting winter swans, has dwindled from 29,000 in 1995 to perhaps 200 now, sharing the company of Greenland white-front geese at the grasslands of Wexford Slobs.

No longer driven to flee (or less and less often) from cold Russian winters, they typify “short-stopping” migrations that keep birds closer to their breeding grounds.

Even the UK, which offers the geese free barley at the Slimbridge wildfowl centre, has seen a 77 per cent decline over 25 years. At David’s lake, pochard and tufted duck have ceased to arrive for some 30 years.

Much of the shift in the winter ranges of European waterbirds is to the northeast, supplanting the southwest movements that brought birds to wínter in Ireland for thousands of years. Some sea ducks, diving for shellfish, even find enough ice-free open water in winter along Russia’s Arctic coast.

Not all the impacts of climate change are so straightforward. Its extremes are erratic, and the NPWS report cites the threat of an “ecological mismatch” if birds don’t find the right habitat and food for chicks available at the right time.

The spring of 2018 brought a dramatic example in Greenland, as flocks of waders returned from Irish shores to nest and breed. Arctic snow may now melt a lot faster in summer, but its winter depths are now boosted by the extra moisture rising from the ocean.

Because the winter snow-pack can now be a metre deep or more (imagine if Ireland’s new rainfall fell as snow), the little waders found the tundra snowbound well into July, sealing off nesting sites and covering insects and spiders the birds would need for food. Sanderlings, knots, turnstones and others had a disastrous breeding season, often starving to death.

This year, in a total reversal, spikes of Europe’s hot summer air reached up freakishly to northeast Greenland and melted the snowpack early. The first silvery sanderlings have already returned to Ireland, chasing the wavelets back and forth on the strand below me.

Exposed to high seas and often terraced with angry surf, this is not the most hospitable of shores. The sandy curves of sheltered bays, perhaps fed with nutrients from streams, offer much richer pickings. But the lower, intertidal slopes are increasingly taken over by the marine hardware of aquaculture, notably blocks of trestles in parallel alleys, raising cultivated oysters in bags.

Some shorebirds seem happy with such a change in the intertidal landscape, wading independently to probe for food. But birds that fly and feed in flocks of tightly packed individuals, constantly in contact, shy away from being split up among the lines of trestles, where oyster faeces slime the seabed.

A special study for the Marine Institute put knot, sanderling and dunlin at the top of birds showing “a negative behavioural response” and grey plover the species that would never set a wing between the trestles

It’s unfortunate that oyster trestles are the main kind of aquaculture permitted in Special Protection Areas in the EU programme for conserving birds. In 2012 they were set up in 16 SPAs and, says the new report, “these may well have increased”.