What’s this fungus growing in my grass? Readers’ nature queries 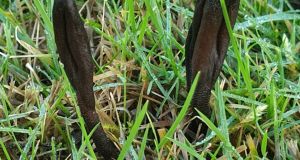 Could you please identify what’s growing extensively in my grass? They are about 5cm tall, appeared about a month ago and show no sign or dying off. I never saw anything like them before. – John Stringer, Douglas Road, Cork
It’s a fungus called earth tongue. It grows in mossy lawns, particularly near the coast from September to December.

We found these cobwebs outside on our patio table. At 10 inches in diameter, they seem unusually large. – Terry Malone, Dunshaughlin, Co Meath
They look like the cobwebs of the common garden spider.

Last month, from the foliage attached to a Christmas log, what I thought was a small mouse darted out and scurried beneath the dishwater. I caught it in a trap and found with regret that it was a shrew. – Bobby Carty, Belmullet, Co Mayo
Some little creatures are more cared about than others.

Before Christmas there was a flock of long-tailed tits twittering as they passed through the trees by the woodshed, tiny pink and black balls of fluff on a cold day. – Deb and Sandy Perceval, Dereen, Co Sligo

For the second time in a month we have had a visit from a pair of parakeets. I found that they were also reported to Eye on Nature in February. Biodiversity Ireland regards them as invasive aliens. – David Finnegan, Fairview, Dublin 3
They are still beautiful and exotic visitors.

For the past 12 years I have been back and forth most days over the Vee Pass in the Knockmealdown Mountains, and the number of red squirrels being killed on the roads leading up to the mountain is terrible. One particular stretch has beech trees and the ripe fruit falling on the road, creating a killing field. – Nicholas Grubb, Waterford