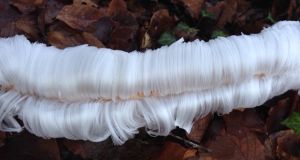 Eyes on nature: the hair ice that Fergus Lunny saw while walking his dog 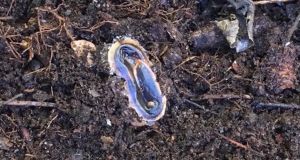 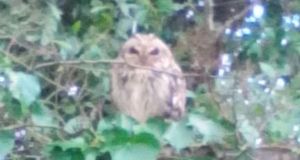 Eyes on nature: the owl that sat happily while Anne Ryan’s brother trimmed a hedge

I was surprised to see an invasive flatworm on our compost heap in south Kerry. I’m sending you a photograph. Is this an unusual sighting?
Ruth Barrington
Castlecove, Co Kerry

New to this country, it is an Australian flatworm, either ‘Caenoplana coerulea’, the blue garden flatworm, or ‘C dendyi’, Dendy’s flatworm. ‘C coerulea’ was introduced to several countries in Europe, including the UK, in pot plants.

I spotted the hair frost in my photograph in two places while out walking my dog.
Fergus Lunny
Enniskillen, Co Fermanagh

Hair ice forms on rotting broadleaf wood when the fungus ‘Exidiopsis effusa’ is present. The mycelium (roots) of the fungus cause the ice to grow into thin hairs 0.01mm in diameter. It happens between latitudes of 45 and 55 degrees north, in humid conditions when the temperature is close to zero. Hair ice is similar but not the same phenomenon as the frost flowers featured in "Eye on Nature" on January 28th.

The little owl in my photograph was sitting happily on its perch while my brother was trimming a hedge nearby. It is unusual to see one during the day? Is it a short-eared owl?
Anne Ryan
Enniscorthy, Co Wexford

Yes, it looks like a short-eared owl, a winter visitor to the southeast and east coasts, and it hunts during the day.

Two blue tits have emptied a feeder full of peanuts, carrying the contents to a nearby hedge. Is this normal behaviour for tits?
Tom Collins
Athlone, Co Westmeath

Yes, tits will cache food when it is plentiful.

I saw a lot of small, brown ducks, the shape of small mallards, at the Bull Wall in mid-January.
Tom Fuller
Glasnevin, Dublin