Ireland ‘could supply 5% of Europe’s electricity’ with offshore wind 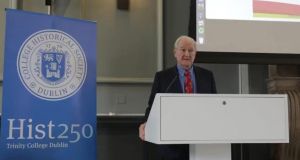 Speaking in Trinity College Dublin at a conference to mark 250 years of the College Historical Society, Eddie O’Connor said 75,000 megawatts of offshore wind energy capacity was achievable at a low cost of 5 cents per kilowatt-hour

Ireland could supply 5 per cent of Europe’s electricity needs by exploiting offshore wind opportunities off the west coast, according to renewable energy developer Eddie O’Connor.

He strongly endorsed the call by the Oireachtas climate action committee that 75,000 megawatts of offshore wind energy capacity be built.

Speaking in Trinity College Dublin at a conference to mark 250 years of the College Historical Society, Mr O’Connor said this capacity was achievable at a remarkable low cost of 5 cents per kilowatt-hour based on realisable wind speeds of 11m per second off the west coast. Sales from that renewable power would be worth double agricultural activity in Ireland, he added.

Electricity would soon replace 45 per cent of power from fossils fuels, and would have to replace oil and gas used in heating and petrol and diesel in transport. This was against a background whereby there would be a 250 per cent increase in demand for power in Europe, he continued.

The big winners would be those countries on the northern periphery of Europe, such as Ireland and Scotland, with offshore wind supplying power to the centre, while the bulk of solar power would come from the south or Mediterranean.

“There will be a net flow of electricity from the periphery to the centres of population, so national governments will not have the control they formerly had with all generation located on their territory.”

Decarbonisation of heating and transport would have to achieved by switching to electricity, the exception being air transport.

Mr O’Connor, co-founder of Mainstream Renewable Power, said he found it hard to imagine batteries would be ever be light enough to power 150- to 500-passenger jets but biofuels were the way forward for aeroplanes.

Offshore wind in the UK was now cheaper than building on land, while onshore wind was now “almost verboten”. The story of solar power production was equally dramatic. “We are building this stuff real cheap.”

For this to be realisable, however, a new “supergrid” would have to be laid over the current grid structure.

Mr O’Connor said there was obvious weakness on energy policy within government. “We have to get up to speed,” he added. “Do we observe planning, or indeed a vision anywhere for this scenario? The answer is no.”

Politicians across Europe were afraid of the costs of this revolution, he said, citing former European Commission president Jean-Claude Juncker’s comment about EU plans for decarbonisation: “We all know what to do, we just don’t know how to get re-elected after we have done it.”

Mr O’Connor said: “My own interactions with Irish ministers reinforce this as some of them have articulated this same fear; it will cost too much to make this transition.”

He added the inability of economists to put pollution at the centre of political economy debate and budget action “is one of the scandals of this era”. Prof John FitzGerald, chairman of the Climate Change Advisory Council, was a notable exception, he said.

“If one were to measure economists’ commentary on [US president Donald] Trump’s trade wars with China, the disparity is alarming.”

There were side effects of global warming which he thought economists should have an opinion on, such as forced emigration into the EU from Africa “which is at least partially caused by the southward march of the Sahara”.