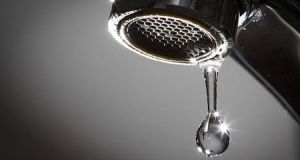 Irish Water says when it took over responsibility for water and waste water in 2014 it “prioritised the health of our customers by focusing on improving drinking water”. Photograph: Getty Images

Irish Water has estimated it would cost €13 billion and require large-scale investment over a sustained period to rectify the issues outlined in the latest Environmental Protection Agency (EPA) report.

Irish Water’s head of asset management Seán Laffey said the company had delivered 66 new or upgraded plants in 2016. “Our asset upgrade programmes delivered or are in the process of delivering over 2,700 individual projects. Currently we have over 1,400 active projects between large infrastructure and capital projects at a value of €2.2 billion.”

The Government fully understood Irish Water’s capital needs up to 2021, Mr Laffey told The Irish Times. When Irish Water took over responsibility for water and waste water in 2014 it “prioritised the health of our customers by focusing on improving drinking water”, he said.

“This has taken substantial investment and work at every stage of a very complex treatment, monitoring and testing process. We also had to prioritise the resilience of our water network and address leakage and high burst frequency to ensure that customers had a reliable supply,” said Mr Laffey.

The utility was ramping up investment to spend an average of €326 million per year on waste-water infrastructure. “This is only possible by bringing a large number of projects through a complex planning process, while optimising value for money.”

In the earlier years large projects were each planned and delivered as single projects. They were now processing multiple projects at a time. In relation to untreated sewage, they were combining 20 sites (out of 44) in a single programme which would bring efficiency benefits through standardisation.

He said progress was being achieved on each of the 44 locations, though this was not reflected in the report as the EPA just measures compliance. In addition, some of the locations were among the most difficult to service. While the public was receptive to water supply facilities, they were less welcoming of waste-water treatment facilities.

Mr Laffey said Irish Water recognised improved operations would deliver greater compliance from existing assets. This was being addressed through a number of programmes, backed up by a much more robust monitoring and testing regime.

He said the lead-in time for building or upgrading a waste-water treatment plant could be up to three years to ensure that all planning, regulatory, environmental and statutory obligations were met. Site selection, public consultation and site purchase were also vital parts of the process. This could took up 80 per cent of a project’s time, whereas construction was often the easy part.