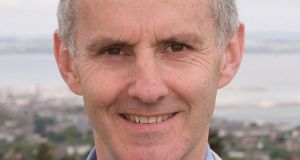 Green Party councillor Ciarán Cuffe: “There is plenty of land to develop on, or housing capacity to be added, without threatening parks.”

Dublin city chief executive Owen Keegan has set his sights on the local “green” in the middle of suburban housing developments as having potential for the construction of apartments.

Speaking at an Urban Land Institute conference in Dublin this week, Mr Keegan said the “public interest” would be served if residential development was permitted on some lands zoned for “amenity/open space”.

Lands covered by this zoning include parks, playing fields, nature reserves and other green spaces.

Speaking to The Irish Times yesterday, Mr Keegan said his focus would be on largely redundant and oversized green spaces which were common in the city’s outer suburbs.

“It was a feature of housing built in the 1970s and 1980s, and into the 1990s, that the developer would provide X amount of open space and we were left with these flat green spaces in low-rise areas of the city. It was the quantity over quality theory.”

These low-quality spaces could be used to provide new high-density homes.

“I think parts of these sites, many of which are pretty useless spaces which don’t offer much in the way of amenity, could be used to provide higher-rise units, in the five-eight story range.”

“Everyone agrees that we need to stop urban sprawl, and bring life back to the centre of our towns and cities, but there is plenty of land to develop on, or housing capacity to be added, without threatening parks. We need higher density development on existing zoned lands.”

There were, however, institutional and industrial lands which may merit consideration for housing, Mr Cuffe said.

“It does seem odd that the Archbishop of Dublin has a 12 hectare (30 acre) back garden just 1.3km from Dublin’s O’Connell Street. It is also curious that the Broadstone bus station occupies a 10 hectare (24 acre) inner-city site that will have two Luas stations opening before Christmas.”

Mr Cuffe also cited Cathal Brugha Barracks in Rathmines and rail yards in the docklands as sites which could be considered.

People Before Profit councillor Tina MacVeigh was recently involved in a successful campaign to have an inner city site, previously planned for development, redesignated as a park. The council is now designing the new park at Bridgefoot Street in Dublin 8 on lands which had lain undeveloped for more than a decade.

Ms MacVeigh said: “Thirteen years ago, the Bridgefoot Street flats were demolished, and there was a plan for an 11-storey building, but that was shelved as a result of the economic crash. So the local people began to use the land for a community garden.”

Some housing will be developed towards the back of the site but Ms MacVeigh said it was vital the city’s green space was increased: “It would be outrageous if our green spaces were built on; they’re what makes a sustainable city.”