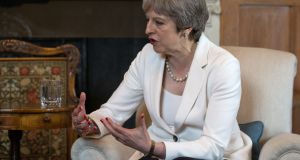 British prime minister Theresa May’s team has privately admitted she might have to accept Permanent membership of the EU customs union, reports the Sunday Times

British prime minister Theresa May’s team has privately admitted she might have to accept permanent membership of the EU customs union, reports the Sunday Times. It follows a secret wargaming exercise which concluded, according to the report, that even Brexiteers such as Michael Gove and David Davis would not resign in protest. However, Boris Johnson and Liam Fox would be likely to quit.

AIB has scaled back the size of its largest ever loan sale, according to the Sunday Business Post. Project Redwood, which had been billed as a €3.75 billion loan sale process, in now likely to contain just €1.6 billion worth of debt, according to the paper. The bank did not comment on the report. AIB has around €12 billion of non-performing debt on its books.

Meanwhile the Sunday Times reports that European banking regulators are set to dash the hopes of 4,300 Permanent TSB customers by ruling that their split mortgages are non-performing, despite being successfully restructured by the bank. The paper reports that this removes any hope of the loans being removed from a portfolio that PTSB is preparing for sale to comply with regulators’ demands for it to reduce its non-performing debt.

According to Minister for Finance Paschal Donohoe there are signs that employers are rewarding employees with pay rises as the economy grows. The Sunday Independent reports Mr Donohoe as urging this to continue in order to spread the benefits of rapid economic growth. It also quotes former senior IMF official Ajai Chopra as describing the current growth levels as “impressive”.

A leading investor in the Dublin-headquartered, but UK-focused, financial services firm IFG has said its current structure “fails to adequately recognise” the value of its assets. The Sunday Independent reports that GVQ Investment Management believes IFG is a “high-quality, undervalued business”. It follows the decision by IFG to instigate a major overhaul at boardroom and executive level.

The State is running out of time in its bid to save hundreds of jobs at Aughinish Alumina’s plant in Limerick, after its parent was caught up in sanctions imposed by the US on certain Russian-linked businesses. The sanctions were applied to its billionaire owner Oleg Deripaska. The Sunday Business Post reports that several options have been examined by officials to ensure the facility is viable.