‘There is an acceptance by young people that change has to happen now. And it will’ 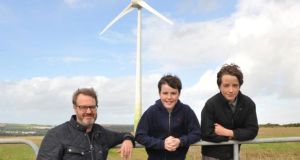 Tillage and wind farmer Michael Quirke: “It would be nice that by the time we reach 2030 a certain proportion of Irish renewables would be owned by Irish people.” Photograph: Larry Cummins

Every day when Michael Quirk passes his 25 -acre barley field near Cloyne, Co Cork, he can easily picture its transformation into a sea of solar panels. He is an optimist. Not just for his farm, but for Ireland’s path toward a greener future.

Originally a tillage farmer, Mr Quirk has had a 1.7MW wind farm operating since 2011 and his solar plans have come through a recent energy auction process successfully.

He is well-placed to talk about the advantages and prospects of community produced renewables, for the community. “When climate change shows itself at its worst it’s the farmer on the farm that feels it the most because they have to work through it,” he says.

“Farmers are just trying to protect their livelihood; farmers just need business; they need a living on the land. You will never find a farmer who will turn down an opportunity.”

It is a relatively common mantra in the agricultural community but Mr Quirk has lived it. A year ago, he was concerned about the viability of community based, smaller energy projects being able to compete with big, well-financed developers with land banks stretching to hundreds of hectares.

However, this year’s first ever renewable energy auction was a success with seven community projects coming through – five solar and two wind.

Last month the Government announced a total of 82 new renewable energy schemes by way of the auction – where projects bid to supply power to the grid at the most competitive prices.

But crucially, locally produced energy production was ring-fenced, Mr Quirk says, ensuring their future. “It’s important that when the Government does something well you say they did it well.”

Challenges will always give way to more challenges, however, and Mr Quirk says financing and construction are now the issues – banks seem focused on scale and larger operations. Perhaps like other small community plans, he is waiting to see what incentives the Government might provide by way of the Budget and Finance Act.

“It’s a chicken and egg thing. The Government know there are projects there, they have come through the auction. Now they have to be built,” he says.

“It would be nice that by the time we reach 2030 a certain proportion of Irish renewables would be owned by Irish people. I am more positive now [about the prospects of that].”

Along with a number of other farmers, Mr Quirk has been working on his 5-megawatt [MW]project since 2014. It will sit beside his wind farm which has two 55-metre high turbines, exporting about 1.9MW onto the grid.

It is the local interest in these turbines that gives him hope for more similar community projects, and for the future in general. School children come and visit, and they get it.

“The future is bright, it’s not as gloomy as people think,” Mr Quirk says. “There is an acceptance by young people that change has to happen now. And it will.”