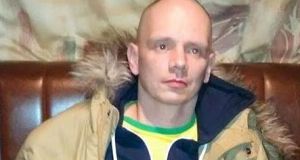 Piotr Krowka, whose body was found at a derelict property, on Glen Road in Maghera. Photograph: PSNI

A murder inquiry in underway after a homeless man was found dead in a derelict house in Co Derry.

Piotr Krowka, who was in his late 30s, was found dead on Tuesday in a former parochial house where he had been staying on the Glen Road in Maghera.

A postmortem established that he had suffered serious injuries to his head and body.

Mr Krowka, who was from Poland, had been living in the area for a number of years, the PSNI said.

Det Chief Insp Geoff Boyce said police were working “to establish the circumstances of this incident and determine the precise sequence of events that culminated in the tragic death of this man.”

“I am keen to identify Piotr’s movements between Good Friday and Easter Tuesday when his body was discovered, and I would appeal to anyone who was in contact with or who may have witnessed Piotr during this time to please contact us,” Mr Boyce said.

“I am also keen to hear from anyone who may have noticed anything suspicious at this house during the time frame to contact detectives at our incident room at Magherafelt PSNI Station.” - PA