There is something touching and subversive about vegans 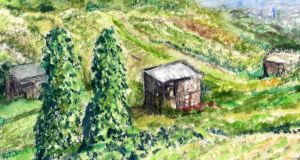 The decades of this column have seen notable shifts towards more eco-friendly attitudes to food. Growing it organically has lost most of its old eccentricity and vegetarianism is free of those well-worn Shavian sandals.

What we choose to consume is often now linked to the wellbeing of the planet as well as ourselves. Even veganism, once thought extreme, has gained enough credence from scenarios of climate change to claim thousands of new recruits. On my own plate, a slice of rosy Mayo lamb is still delectable, but our daily supper protein is fish, undeniably good for us if sometimes inevitably sauced with environmental guilt.

Which brings me to the emblematic and much-discussed vegan sausage roll.

For this, as in much vegan cooking, a key ingredient is tofu, the coagulated curd of a milk extracted from soy beans. It is unwrapped from the supermarket as a soft and spongy block, and a tentative nibble at one corner finds very little taste. Chunks of it may be set afloat in the making of a vegetable stew. Squeezed hard, however, and cooked with nuts and spices, tofu can prove quite acceptable to palates craving sausage-meat. More to the point, it is just as high in protein and full of the good amino acids, vitamins and minerals.

Such nourishment has made soy beans the most versatile protein crop on Earth. Cultivated originally from a wild vine in north China, they come somewhere between peas and broad beans, They can be eaten young and green (as “edamame”), harvested dry and hard and processed into animal feed, or processed for people as tofu, miso, milk or soy sauce. Its oil may also be used in baked and fried foods.

Without – so far – a hot enough climate for growing the beans, Ireland imports more than half a million tonnes a year, almost all as feed for cattle, pigs and poultry. Most traditionally it came from South America, but because of its trade war with China the United States has turned to Europe as a valued soya bean market.

Until Brazil was dissuaded from clearing Amazon rainforest to plant more beans (it has largely switched to deforesting wild savannah), vegans eating tofu could feel a twinge of environmental conscience. But soon came the extra worry that their soya milk and curd might carry the taint of genetic modification (GM).

Most of the world’s soy animal feed is now a GM product, grown with resistance to herbicides such as glyphosate. Three new such products were licensed for importation by the European Union in 2016 and about half the soy and maize feeds imported to Ireland the following year were from GM crops.

Distressed by the environmental destruction that came with the boom in soy, the World Wildlife Fund enlisted the big agribusiness corporations, to a Roundtable on Responsible Soy. But this has since been charged by NGOs such as Friends of the Earth with leaving loopholes for deforestation and ignoring concerns over glyphosate.

Compared with the quantities of soy grown for cattle and pig feeds, human consumption is minuscule. But UK vegans have been quick to press soy food producers on the origin and quality of their beans and their policies on use of land. Companies such as Aldi and Marks & Spencer were quick to claim GM-free certification by their suppliers, some of them growing beans in warmer parts of Italy and France.

To ripen and mature they need a long, hot summer, like the exceptional one of last year, though there are new edamame varieties bred for cooler conditions. These might be tried on the allotment, where tepees of runner beans, as in my drawing, would be the safer, more productive, bet. As for the polytunnel, I’ll stick with my broad beans, 25 per cent protein and, overwintered, just bravely coming into flower.

There can be something touching and subversive about vegans. I’ve just received my latest online issue of the The Ecological Citizen, a polished and peer-reviewed, radical journal “in defence of the Earth”. A recent article called “Why I’m Vegan” is written by Michael Anderson, “a musician and manager of an independent coffee shop” in Essex. He speaks for the intellectual passions that can underlie mere choice of restaurant.

Much of what Anderson reads on veganism, he says, is all about its benefits for personal health. “This,” he writes, “is an obvious manifestation of individualism, promoted by a capitalist socio-economic system . . . For me, the primary reason for abstaining from, and making a stand against, factory farming, should be that it is a highly-polluting form of legalised mass slaughter, de-connecting us from other species and the planet, not that it might help my digestion.”

That’s about it. More tofu, anyone?