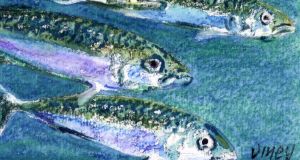 Mackerel may be in larger numbers outside traditional fishing waters, but are showing signs of starvation

The strongest voice for marine science in the northeast Atlantic comes from the International Council for the Exploration of the Sea (ICES), based in Denmark. With seagoing data from national research agencies, including Ireland’s Marine Institute, and surveys of its own, ICES tries to guide Europe’s political decisions on human use of the ocean.

The council’s precautionary “ecosystem approach” demands concern for ocean life as a whole. But in dealing with national politics, fixing and sharing catches of individual species is still its main business.

One such species on which it issues advice and conducts research is mackerel. There is no long-term management strategy between fishing nations relating to the pressure on mackerel stocks, and Iceland, Russia and Greenland still set their own quotas. Ireland’s share of mackerel this year is 55,000 tonnes.

In Bergen, Norway, last November, the EU, Norway and the Faroe Islands agreed a total allowable catch of mackerel in the northeast Atlantic for 2019 of 653,438 tonnes, a 20 per cent cut from 2018. Ireland’s Killybegs trawlermen feared worse. ICES had urged a reduction of 61 per cent. Its scientists had claimed a severe decline in stock since 2011. But Sean O’Donoghue, head of the Killybegs Fishermen’s Organisation, insisted that Irish and all other trawler fleets were finding large shoals of mackerel over the entire northeast ocean, suggesting an actual increase in stocks.

O’Donoghue’s narrative also appears in the Marine Institute’s latest advisory Stock Book as additional “information from stakeholders”. Along with “good recruitment to the fishery”, it asserts that mackerel is being caught “in substantial amounts” outside the usual target waters. ICES agreed in Bergen to look at the evidence again and come to another meeting with the coastal states in the next few months.

The council is used to having its advice resisted, but this conflict seems exceptional. It also coincides with a new and dramatic scientific hypothesis that claims an explosion of Atlantic mackerel, and blames it for major declines in salmon and seabird populations.

This comes from Dr Jens Christian Holst, a scientist at the Institute of Marine Research in Bergen until 2013. An authority on the ecology of salmon at sea, Holst worked for many years on Norwegian herring stocks before switching to studying fishery management in the wider ocean ecosystem.

His approach has been controversial, and he now works as an adviser for the commercial pelagic trawler fleets of Norway. But Holst’s knowledge is also valued by the Atlantic Salmon Trust, where research director is Prof Ken Whelan, long eminent in Irish salmon research. The fate of Irish fish in their first, post-smolt summer at sea forms part of Holst’s study, Hypothesis on overgrazing and predation, which can be found online.

This tells of a massive spread of spawning mackerel, westwards and northwards from the Norwegian Sea, producing a six-fold increase in stock over 10 years and doubling its density. Migrating north from European rivers and entering the same waters are some 10 to 15 million post-smolt salmon, still small enough to be the prey of increasingly hungry mackerel.

The collapse in salmon returning to their native rivers – down by more than 70 per cent in Ireland – points to massive mortality at sea. A former director of the Atlantic Salmon Trust, Tony Andrews, says in a foreword to Holst’s scientific paper that this “provides a possible and feasible explanation”.

Apart from direct predation, mackerel and salmon are competing for the same food as they graze on marine zooplankton. Both are showing signs of starvation. A seven-year-old mackerel is now, says Holst, half its weight of 10 years ago. He points to the virtual disappearance of G6 mackerel, which at 600g or more were once valuable in the Japanese market.

Overgrazing by billions of mackerel and fast-growing migrant salmon is also, he suggests, hitting seabirds such as kittiwakes and puffins that depend on the same zooplankton and small fish for food.

Gannets, on the other hand, dive for mackerel and are feasting on their shoals. They have followed them northwards, even building a breeding colony at the tip of the Svalbard archipelago. Mackerel were scarcely seen in northern Norway before 2008, but now are netted off east Greenland and Iceland.

Holst combines data from existing marine research with the wider experiences of professional fishermen. In the current Inshore Ireland journal he urges a start to tests of his hypothesis. He proposes catching 50 tonnes of mackerel this May on known salmon migration routes west of Scotland, and inspecting the 150,000 stomachs for smolt. He also proposes an international “thinning out” of mackerel stocks.

In this, the International Year of the Salmon, a five-pound fish was caught (and released) on a Donegal river on New Year’s Day. This was one, at least, to have dodged the wall of hungry Scomber Scombrus (Atlantic mackerel) – a predator, says Dr Holst, scarcely met by Irish salmon north of Ireland 20 years ago.