Webcam set up in Glengariff, Co Cork so public can follow hatching of chicks online 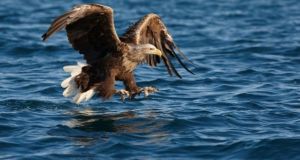 A small group of young white-tailed eagles arrived into Kerry airport on Saturday from Norway as part of a project to bolster the breeding population of this once extinct species in Ireland. Photograph: iStock/Getty.

A small group of young white-tailed eagles arrived into Kerry airport on Saturday from Norway as part of a project to bolster the breeding population of this once extinct species in Ireland.

The young eagles, which were monitored for a number of months in Norway before coming to Ireland, will be released at Lough Derg, the lower Shannon estuary and Killarney National Park.

They arrived in Ireland on Saturday afternoon after a flight of four hours and 20 minutes from Trondheim airport in northern Norway. Their arrival marks the second phase of a the project to re-establish the presence of these eagles in Ireland.

The birds, which were collected in June 2020 by the Norwegian Institute for Nature Research, will be held at sites in Munster before released into the wild in early to mid-August. They will be tagged before release to allow the project to monitor their progress and their integration into the exiting Irish breeding population, according to a statement from the Department of Culture, Heritage and the Gaeltacht.

The department noted that the reintroduction project was “critical” in terms of Ireland’s biodiversity and said reintroducing a wild species that was exterminated by man would “contribute significantly to the economic, tourism and local communities and indeed to human wellbeing”.

A total of ten young eagles collected in Norway are expected to be released across the three Irish sites this year to provide an additional boost to the small Irish breeding population.

One hundred white-tailed eagles were released in Killarney National Park in Co Kerry between 2007 and 2011 and subsequently spread out across Ireland with the first breeding taking place in 2012 on Lough Derg in Co Clare. Since then, between eight to ten pairs have successfully fledged 26 chicks with an additional six chicks expected to be born into the wild in Munster over the coming weeks.

A live streaming camera of a white-tailed eagle nest has been set up at a nest in Glengariff in Co Cork by the National Parks and Wildlife Service so members of the public can follow the arrival of new chicks this summer.

The department warned that while some Irish-bred eagles were reaching maturity and starting to breed, the small population on this island remains vulnerable to illegal poisoning. A decision was made to carry out a supplementary release of birds to bolster numbers following the negative effects of the 2018 avian flu and Storm Hannah last year, said the department.

The project will continue to work with farming communities in the release areas to ensure that eagles and farming can coexist, it added.

Minister of Culture, heritage and the Gaeltacht Josepha Madigan welcomed the new arrivals and praised wildlife personnel involved in the project in Ireland and Norway for their “incredible team effort”.

“Thanks to their logistical work, bringing the latest influx of White-tailed Eagles to these shores, the future is positive for the eagle, which had been extinct in Ireland for over a century,” she said.