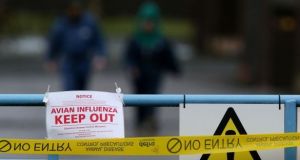 The disease has been found in wild birds in England, Scotland and Wales. Photograph: Andrew Milligan/PA Wire

The strain of avian bird flu found in Co Wexford last month has yet to be confirmed as more cases are being discovered across Europe.

The Department of Agriculture said the influenza subtype H5N8 was found in a wild duck known as a “wigeon” on December 28th. The bird was found alive but unable to fly.

The department said further tests were being carried out to find out if the virus is the same as highly pathogenic strain currently present in Britain and mainland Europe.

A spokeswoman said on Thursday the results of these tests have not come back yet.

“ Further tests are now required to determine whether the virus is the same strain as that in GB and mainland Europe but it is likely to be the same strain,” she said.

“ There is no evidence to date of further spread of the virus.”

The Health Protection Surveillance Centre (HPSC) had said although the H5N8 subtype can cause serious disease in poultry and other birds, no human infections of the virus have been reported anywhere.

The risk to humans is “considered to be very low”, it said.

The department took the unprecedented step of ordering farmers to move their poultry indoors days before the discovery.

On Wednesday, France ordered a massive cull of ducks after a severe outbreak in three regions.

France has the largest poultry flock in the EU and has reported 89 outbreaks of the highly contagious H5N8 so far.

“The principle is to quickly kill the species most affected to date by the virus,” the French ministry said in a statement.

All free range ducks and geese, about 800,000 birds, will be slaughtered until about January 20th in an area in southwestern France, which includes parts of the Gers, Landes and Hautes-Pyrenees.

On Wednesday, the British government extended restrictions and told poultry owners they must keep their ducks, chickens and geese indoors until February 28th to protect against the threat of avian influenza.

The Welsh government this week said a backyard flock in south-west Wales had been slaughtered after catching avian flu.

The disease was confirmed in turkeys at a farm in Lincolnshire on December 16th and also been found in wild birds in England, Scotland and Wales.

In Bulgaria, a bird flu outbreak has spread to at least 26 farms, the agriculture ministry said on Wednesday and a mass cull of 110,000 birds, mainly ducks, will launched in a bid to contain the disease.

The Czech Republic confirmed a case of bird flu on Wednesday, the country’s first case in about 10 years.

Germany is set to cull about 22,000 more turkeys after suspected cases of bird flu were found on two farms.

Almost 100,000 birds were already culled in late December after an outbreak of the disease.

Different strains of avian influenza have spread across Asia in recent weeks resulting in the slaughter of millions of birds.