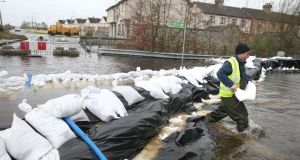 A maintenance programme on the River Shannon will commence shortly, the Minister of State with responsibility for Flood Relief has said.

“We’re in action mode right now, this is something that will last,” Sean Canney told RTÉ’s Morning Ireland.

“This will be an ongoing programme. We’re looking at solutions not just reports.”

The Minister said “no one will be forgotten or left behind”.

He said €4.2million had been spent on flood relief, with 7,000 properties being assisted. A further 23 schemes are in the design development stage with 12 under construction.

Mr Canney was responding to a report on a family in Clonlara, Co Clare who claimed that because they had carried out preventative works themselves they were passed over for funding and assistance.

“I want to reassure people that rural Ireland has not been forgotten. The Office of Public Works (OPW) and Clare County Council are trying to find solutions.”

He said people who took flood preventative measures themselves will not be penalised.

A plan is being put in place to dredge the river Shannon, he added. “We need a strategy to bring in flood relief, but we can’t get to every place at the one time. The plan will start shortly, it will be something that will last.”

Before Christmas it was agreed by State agencies that the Shannon will have to be dredged to curb future flooding - despite repeated declarations that dredging was barred by European Union directives.

The Shannon Flood Risk Group, led by the Office for Public Works, accepted “strategic maintenance works” must be carried out on Ireland’s longest river.

State agencies now acknowledge that “we must make room for the river”, Mr Canney said before Christmas. “It was agreed by everybody that we need to start a plan.

“We will be taking out some of the stuff, the silt and vegetation that has taken over,” said the Minister of State, who had repeatedly called for dredging to take place before he entered office.

A separate plan to take out “pinch points” or outcrops of rocks in the river could reduce the level of the Shannon by half a metre in both summer and winter.

The flood risk group consists of the 10 State agencies that share responsibility for the Shannon, who were brought together by the Government following last winter’s disastrous floods in surrounding regions.