Storm Hannah: 21,000 without power as red weather warning kicks in 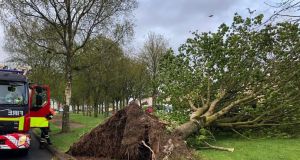 About 21,000 customers are without power tonight, predominantly in counties Kerry and Cork, with further outages expected as Storm Hannah lashes the west coast.

A status red wind warning which was in effect for counties Kerry and Clare has now passed but several other wind warnings are still in place across the country.

Earlier this evening, thousands of homes and businesses in Co Kerry were left without power as the storm moved in from the Atlantic, felling trees and leaving roads impassable as local authorities told people to remain in their homes.

The damage is mainly attributable to trees falling on overhead lines as a result of the high winds, which have been recorded as in excess of 130 kph.

Areas most affected include the Iveragh and Dingle peninsulas and areas of West Cork including Macroom.

There have been no reports of storm-related injuries, as people appear to be heeding warnings issued as the storm approached. Kerry County Council thanked residents for heeding its warnings, saying that Garda reports suggested people were staying indoors and off roads.

A yellow warning has also been issued for Dublin from 11pm on Friday to 10am on Saturday.

A seperate status yellow wind warning is in place for Connacht, Carlow, Kildare, Kilkenny, Laois, Longford, Wexford, Wicklow, Offaly, Donegal, Tipperary and Waterford will remain in place until 10am on Saturday.

A number of flights and ferry sailings have been cancelled, while public transport is curtailed in affected areas.

AA Roadwatch has advised road users not to travel during the red warning periods “unless absolutely necessary”. Motorists are advised to watch out for wind blown debris on the road tonight and tomorrow morning, and allow extra space between other vehicles and road users.

Parts of west Galway could also see very high gusts of wind which would equate with a red weather alert.

Latest reports from our weather stations across the country with storm Hannah making an impact. #StormHannah https://t.co/MvCx72KIaT pic.twitter.com/glwG2kNVQH

The red wind warning, Met Éireann’s most severe, advises members of the public to take action and is described as a comparatively rare event. “It implies that recipients take action to protect themselves and/or their properties; this could be by moving their families out of the danger zone temporarily; by staying indoors; or by other specific actions aimed at mitigating the effects of the weather conditions,” Met Éireann said.

Clare County Council said its teams would only respond to “very severe incidents” this evening, and advised residents to stay in their homes until the worst of the winds had passed.

This evening the local authority said that its fire service units in Scarriff, Killaloe and Kilrush have been deployed to remove trees and debris from roads. It warned that further road hazards are expected, and urged the public to avoid unnecessary travel.

The high winds were already having an impact early on Friday evening. Several electricity faults were reported on the west coast as wind speeds increased.

It said it is in the process of despatching repair crews to affected areas to make the electricity network safe, assess the damage caused and safely restore power as quickly and effectively as possible.

As the storm tracks up the west coast, faults are being recorded further north, with thousands affected in Limerick at Kyletaune and Ahane.

A lifeboat crew at Castletownbere RNLI was launched this evening at 6.16pm to assist a 33ft fishing vessel which had lost power in Bere Haven Harbour in west Cork.

“The lifeboat crew battled sea conditions reaching force nine to assist the vessel with a crew of two people on board. The fishing boat had lost all power and was at the mercy of the weather. Once on scene the lifeboat crew quickly took the vessel under tow and brought it safely to shore where the crew could seek shelter,” a spokesman said.

Lifeboat operations manager Paul Stevens said: “Conditions are very challenging off shore this evening and the crew did a great job in bringing everyone home safe. The waves are very high and there are strong winds blowing. We would advise everyone to seek shelter and not attempt to go out during the weather warning.”

There have been cancellations to Bus Éireann services between Limerick and Galway and on the 343 and 336 routes in Clare. Irish Rail services in the worst affected regions will run at reduced speeds. Fallen trees were reported on roads across Kerry, as well as in Innishannon in Cork and Reens in Limerick. Cork County Council advised motorists to take caution and people to stay away from coasts, especially in the southwest.

Ferry sailings from Doolin to the Aran Islands have been cancelled, while Aran Island Ferries services from Ros a Mhíl to Inis Meain and Inis Oirr were also cancelled.

The State’s fire and emergency management team said appropriate public safety messages are being relayed, especially messages about staying away from coastal areas.

However, it said that tidal conditions are such that coastal flooding is not anticipated, even with an expected storm surge.

While the worst of the weather will be short-lived and no river flooding is expected, Met Éireann head of forecasting Evelyn Cusack said there is a risk of local surface flooding, coastal flooding and some coastal damage.

The Cliffs of Moher Visitor Experience will be closed to the public until tomorrow due to the weather.

Met Éireann forecaster Siobhán Ryan said the storm was heading towards Ireland from Newfoundland. “Storm Hannah will be positioned off-shore roughly 200km west of Slyne Head by 4pm on Friday with the closed storm system forecast to track directly inland across the southern portion of Ireland on Friday evening/night. After that it will move away towards Britain and slowly fill, losing most of its strength on Saturday morning.”

She said members of the public should be prepared for the anticipated conditions “especially those living or travelling to the southwest, with some disruption and power outages likely”.

“There is an increased risk of impacts to life and property during times of severe weather, with flying debris of particular concern during any wind event. People are advised to take in their BBQ or loose garden furniture, especially after the recent warm spell,” she added.

She said that because trees are now in full leaf there was an increased threat of tree damage and felling. “Other impacts may include travel disruption, with large and dangerous waves expected to crash into southwest coasts.”

“Whilst Storm Hannah will primarily be a wind event, spells of heavy rain will be wrapped up around eye of the storm too,” Ms Ryan added.

The last of the heavy rain was expected to clear the north and east during Saturday morning and winds will abate then.