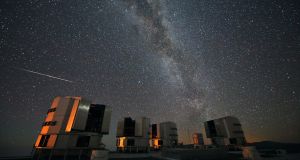 The most spectacular meteor shower of the year will be visible from Ireland on Thursday night.

The Perseids metoer shower is the best known of the periodic meteor showers which occur during the Earth’s orbit of the sun.

Unfortunately, the forecast for the early hours is not great with a lot of cloud cover over the country, but it might brighten up just long enough to see some.

Each year in August the Earth bisects the tail of comets which are also orbiting the sun.

The Perseids are created when the Earth crosses the tail of Swift-Tuttle, a comet which takes 133 years to orbit the sun.

This year Earth will pass closer to the centre of the comet and astronomers believe it may result in one of the most spectacular Perseid showers of recent years with as many as 200 meteors an hour.

Meteors are created when tiny flecks of dust and debris from the comet penetrate the Earth’s atmosphere at nearly 60 kilometres per second creating a shockwave. They burn up quickly in the atmosphere leaving the impression of a huge fireball.

The Perseids peak after midnight Irish time and into the early hours of the morning. The advice is to look east in the direction of the constellation of Perseus which can be easily located using a sky map or one of the many astronomy apps available on your mobile phone.

The singer-songwriter John Denver was so impressed by them that he wrote Rocky Mountain High. “The Colorado rocky mountain high/I’ve seen it rainin’ fire in the sky.”

Astronomy Ireland is organising a National Perseid Count via its websitewww.astronomy.ie

Everyone in Ireland can get involved as you need no equipment just an ability to count how many you see each 15 minutes.