Overconsumption is everywhere: in a diamond mine in Rwanda, a house full of clothes 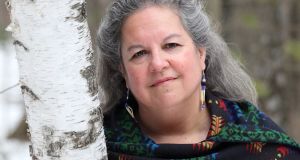 Robin Wall Kimmerer: she contrasts a Potawatomi creation myth with the Judaeo-Christian account of how God made the world, and where we fit into it

“I offer,” Robin Wall Kimmerer writes at the opening of her remarkable book, Braiding Sweetgrass, “stories meant to heal our relationship with the world…stories that allow us to imagine a different relationship, in which people and land are good medicine for each other.”

Kimmerer is both a distinguished environmental biologist and a devoted custodian of Native American cultural traditions. She was astounded when she surveyed 200 of her ecology students and found that hardly any of them could imagine what beneficial interactions between humans and nature might look like.

Her own family upbringing – it only dimly reflected the original richness of the traditions of her Potawatomi people – was still based on a radically different assumption: that our species only exists through mutually enriching bonds with all other living creatures.

This assumption, of course, closely reflects the insights of her scientific discipline, ecology, which finds a web of inter-dependence between all life forms.

I have to confess that I approached this book with some trepidation despite warm recommendations from American conservationists.

A good deal of starry-eyed nonsense has been written about “indigenous ecological knowledge”. Justifiable anger over the savage genocides by empire-building Europeans has fed an unhistorical, unscientific and ultimately patronising narrative: that the inhabitants of the colonised continents lived in a state of perpetual Edenic harmony with nature.

There are occasional echoes of this narrative in Kimmerer’s work, and she sometimes sees contemporary Native American culture through rather rosy lenses.

Yet the core of her book offers valuable pointers along a trail that a number of other environmental writers are also blazing at the moment. They all say that a restored, direct and personal relationship with the natural world is vital if we are to avoid the nightmare environmental destinations towards which our culture currently appears hell-bent on travelling.

She quotes the ethnobiologist Gary Nabhan, who wrote that that such a restoration starts with “re-story-ation”, with examining what we tell ourselves about our place in the world.

So she starts off by contrasting a Potawatomi creation myth with the Judaeo-Christian account of how God made the world, and where we fit into it.

A flock of geese see her coming, and spread their wings to break her fall

The Potawatomi’s first human was Skywoman, who falls accidentally from the heavens but has the wit to grab fistfuls of seeds from the Tree of Life as she begins her tumble. Her breaching of the Skyworld brings light to our world, but as yet there is only ocean, no land.

A flock of geese see her coming, and spread their wings to break her fall. Many creatures then collaborate to draw mud from the ocean floor, and create land on the back of Turtle, where Skywoman’s dancing brings north America to birth.

Scattering her seeds on the new earth, Skywoman peoples the land with vegetation, and the animals multiply, offering food to her offspring (for the sceptics among you, she was already pregnant when she fell).

According to Kimmerer, the contrast with the story of Eve could hardly be greater. She argues that the Bible story has had dire consequences, leading directly towards our unsustainable use of natural resources and our perilous impacts on climate.

“On one side of the world were people whose relationship with the living world was shaped by Skywoman, who created a garden for the well-being of all. On the other side was another woman with a garden and a tree. But for tasting its fruit, she was banished from the garden and the gates clanged shut behind her. That mother of men was made to wander in the wilderness and earn her bread by the sweat of her brow, not by filling her mouth with the sweet juicy fruits that bend the branches low. In order to eat, she was instructed to subdue the wilderness into which she was cast.”

Of course, there are other interpretations of the creation account given in the Book of Genesis. Pope Francis gives a reading of this story much more favourable to ecological concerns in his inspiring environmental encyclical Laudato Si, where he sees it as a call to responsible stewardship of the environment.

Nevertheless, far too many Christian conservatives still use the notion, quite explicitly in the case of many leading Trump supporters, that God granted us “dominion” over the natural world to excuse and even accelerate our heedless destruction of the very framework on which our lives depend.

It is to Kimmerer’s credit that she does not portray hunting and gathering as underpinning an idyllic society, nor does she suggest that we should attempt to return to it.

She recognises that seasons of low-hanging fruit alternated with seasons of the “hunger moon” for her people; harsh decisions had to be made about the survival of the old and the very young, and the spectre of cannibalism haunted winter communities.

The more a Windigo eats, the more ravenous it becomes

It is precisely this experience of dire scarcity that yields the other key story underpinning her book, a cautionary tale about greed and sustainability expressed in the myth of Windigo, a cannibalistic monster in human form whose appetite could never be sated:

“The more a Windigo eats, the more ravenous it becomes . . . Consumed by consumption, it lays waste to humankind.”

The Windigo’s footprints, she says, are everywhere today, “in a square mile of industrial soybeans. A diamond mine in Rwanda.” And then, rather closer to home, “in a closet full of clothes”.

How are we to change a culture whose core consumerist ethos makes Windigos of us all, regardless of the cost?

Kimmerer makes a brave attempt to suggest that the sharing rituals of her people, with their emphasis on generosity, and even their language, which treats birds, trees, herbs and bears as persons, not things, may offer us routes away from the cliff edge.

McFarlane alerted us to the dropping of words like 'acorn', 'bluebell', 'kingfisher' and 'lark' from the children’s edition of the Oxford English Dictionary

She is perhaps more convincing when she reminds us that great transformations, in cultures as well as in nature, can happen apparently quite suddenly, after long periods of subterranean gestation.

Hopefully she is right. But one can’t help recalling that while what she writes is true of the coming of spring, it’s also true of the advent of a tsunami.

‘RE-STORYING’ OUR PLACE IN THE WORLD

Several environmental writers have also drawn attention to the progressive loss of connection to nature in our culture, and to the key role that stories, and language itself, can play in restoring a more mutually beneficial relationship.

In Landmarks, Robert McFarlane alerted us to the dropping of words like “acorn”, “bluebell”, “kingfisher” and “lark” from the children’s edition of the Oxford English Dictionary.

“Language deficit leads to attention deficit. As we further deplete our ability to name, describe and figure particular aspects of our places, our competence for understanding and imagining possible relationships with non-human nature is correspondingly depleted.”

He goes on to gift us with personal stories set in particular landscapes, each with extraordinary glossaries that indicate how recently the peoples of these islands often felt as intimately connected to nature as Kimmerer’s people did – and suggests how we might begin to recover that connectedness.

Two other authors have also explored these issues, weaving science, literary imagination and intimate local knowledge of places to “re-story” our place in the world: Justin Hoffman’s The Small Heart of Things and David Haskell’s The Songs of Trees.

1 Trump turns to bible for photo op as DC burns around him
2 Covid-19: Easing of restrictions ‘unlikely’ to be speeded-up
3 Today expected to be hottest day of the year so far
4 Coronavirus: Public urged to stick with ‘tough’ restrictions to allow phase two proceed next week
5 Body of missing five-year-old recovered from Lough Mask, Co Mayo
Real news has value SUBSCRIBE