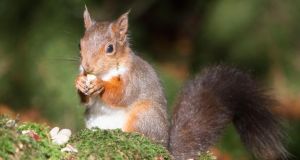 Television presenter and photographer Colin Stafford-Johnson has lent his support to protecting a colony of endangered red squirrels in Co Donegal.

RTÉ’s Living the Wildlife presenter has thrown his weight behind a campaign to save the animals after Coillte planned to run a road through their colony.

The squirrels have set up home in recent years in the Lis na Grá forest in Muff on the Inishowen peninsula.

But the State forestry agency has plans to put a road through the forest to access a crop of Sitka spruce trees, which they plan to harvest.

The 100-acre forest is home to a family of dozens of the red squirrels and has become a visiting point for thousands of families hoping to catch a glimpse of the animals. But locals say the new road will frighten off this native species of squirrel and drive them from the area forever.

Emmy Award-winning film-maker Stafford-Johnson is one of more than 2,500 people who have signed a petition to save the animals.

He is due to visit the forest in the coming days to see the squirrels and to lend his support to campaigners.

Having had meetings with the body’s engineers, locals are hopeful that Coillte will change its plans. Local businessman and environmentalist Bren Whelan described the meeting as constructive and positive.

“We voiced our concerns about the proposed road and discussed alternatives in a very constructive manner,” he said. “I am delighted to say that we have now received a verbal agreement from the Coillte engineer to reconsider their plan and to find another route into harvest their Sitka spruce crop.”

A planned public meeting to be held on December 1st will go ahead and at this point it is hoped to clarify Coillte’s plans.