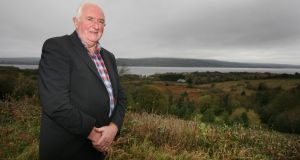 Teacher Keith Conefrey wants badly to come home to Leitrim. Twenty years living in Dublin, the 37-year-old primary-school teacher still returns at weekends, plays football with the local GAA team, and spends summers working on his father’s farm in Aughavas, which lies between Mohill and Killeshandra.

“It was always the plan to come home and live beside my family and take over the farm which my Dad took over from his Dad,” he said. He now fears his carefully-made plans will be scuppered by decisions taken by Leitrim County Council as it tries to ensure that septic tanks for one-off houses do not pollute ground water.

Conefrey was one of 13 people chosen for a council-run pilot scheme, as it seeks to find sewerage systems that would meet with Environmental Protection Agency (EPA) rules. However, Conefrey and the other people in the trial gasped when they were told that each of them would have to pay €55,000, and then be subject to testing for four years.

Four years ago, a third of all one-off septic tanks tested failed first inspections, although compliance rose dramatically after repairs. Two years ago, 26 houses were examined. Twelve failed, but eight were later brought up to standard.

Local councillors argue that the tougher rules have brought one-off construction to a standstill in the county, the least populated in Ireland. Last year, just 25 planning permissions were granted. Six of them were “replacement houses”, meaning just 19 new homes were approved. So far this year, just seven new homes have been cleared, along with six “replacement” properties.

Architect Peter O’Rourke from Ballinagleara, Co Leitrim has a good insight into how strict rules on effluent treatment have practically stalled the construction of one-off housing in the county. It is five years since he designed a one-off house in rural Leitrim which was submitted to the planning process. Ten years ago he was designing up to 50 annually in the county.

“If I was dependent on one-off housing in Leitrim I would have closed down five years ago,” said O’Rourke. He said he can tell “without getting out of my jeep” if a client has any hope of getting planning permission, with rushes a giveaway that there will be a problem with the soil. He rarely takes on a client now, saying it would be unfair to take their money as “95 per cent of them would not pass” .

The architect says he has no argument with the concerns about septic tanks given the nature of the soil in Leitrim, but he believes that with a little “vision” solutions could be found.

“You have to look at the bigger picture. We are hearing on the news every night about housing shortages but the fellow who wants to build here and can’t get planning may end up on a housing list somewhere else.”

The sewage treatment system now approved by the council was designed in Denmark in 2008 and uses a willow plot to ensure there are zero discharges into the surrounding groundwater. The phosphates and nitrates in the sewage are used up by the willow which ends up as fuel for wood-fired burners.

However, the cost of the Danish system in Ireland has provoked fury from the Leitrim applicants: “It’s a joke,” said Conefrey. “The cost is extortionate.”

He was even angrier when he got a breakdown of the costs, including construction fees of €30,000 (plus VAT), with €10,000 of that being spent on labour during a 10-day build.

“Peder Gregersen, who developed the zero discharge willow facility in Denmark, estimated that it takes a day and half to construct. Even if you allow that ours would be bigger, that still means about three days,” Conefrey said, adding that he was even more puzzled to be told he would be liable for a series of fees, including €7,500 for testing over the first four years of the system’s life.

“It appears the client and not the contractor will be paying for the instrument fees even though the contractor can use them again. I obviously won’t have any use for them once the system is in,” he said. “In reality the data will be used again by Leitrim County Council and by the Government. This data could be used by thousands of other householders.”

Conefrey’s biggest gripe, however, is that he could pay out €55,000 for a system yet still find at the end of it that he does not meet EPA standards: “I asked if would I have to pay for any changes that may be needed. They said, ‘Yes’. How can that be? This is not natural justice. If you look at any industry in the world, trials are free.

“If I go to a bank I won’t get a mortgage until I have planning permission. If I tell them I need €55,000 before any work starts, will they even give me a mortgage? My house will already be in negative equity,” he told The Irish Times. Given that he is 37, he does not, he says, want to move into his parents’ home with his wife.

Insisting that he does not want a hand-out, Conefrey said he does want fair play. Equally, he is adamant he does not want to cause pollution. “I want to keep the countryside safe. In my opinion, it should be possible to put in a septic tank which could be emptied out twice a year and brought to a treatment plant. I would have no problem dredging it four times a year.”

Given its often boggy, wet nature, 87 per cent of rural Leitrim land does not meet EPA T90 standards in that it takes more than five hours for water to drop four inches in a percolation hole, so it struggles to deal with septic tank run-offs. Unabsorbed wastewater can form stagnant pools, creating a health risk for humans and nearby water sources.

Despite concerns, local politicians insist septic tanks are not a major polluter. Fianna Fáil councillor Paddy O’Rourke backed the idea of regular collections of septic tank waste for treatment elsewhere, but the EPA has already said that would cost too much and would have to happen too often.

Meanwhile, Leitrim County Council said the Danish system, adapted for Irish needs by Trinity College scientists, is an effort to find “innovative solutions” to the problems caused by the county’s geography. Saying that the trial is the best course for people who want planning permission now, Prof Laurence Gill from Trinity said some householders do not even know where their septic tank is.

For now, however, Conefrey’s dreams of living in Leitrim are on hold: “It looks as if I am going to be left in Dublin. I have friends who leave Leitrim every morning at 5.30am to go to work in Dublin, many of them on construction sites. They spend one night or two a week in Dublin. That shows how keen they are to live in Leitrim.”