‘100% Club’ will launch on fringes of European Climate Innovation Summit 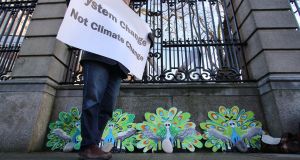 Companies throughout the world are to be challenged to reveal annually the full extent of their greenhouse gas (GHG) emissions at the launch of an initiative in Dublin later this week.

The “100% Club”, a joint academic and industry initiative, is to be launched on the fringes of the first European Climate Innovation Summit taking place in Dublin Castle tomorrow.

There are only 20 major companies who disclose 100 per cent of their GHG emissions, which contribute to global warming. Inadequacies in emissions disclosures could mislead investors and hinder progress of country, investor and business initiatives addressing climate change and looking to accelerate transition to a low-carbon economy, according to its founding partners.

The initiative supports the principles of the Financial Centres for Sustainability (FC4S), a UN-backed network mobilising resources and expertise of financial centres around the world to implement the Paris Agreement on climate change through deployment of “green and sustainable finance”.

It is also being led by Climate-KIC, the EU’s main climate innovation initiative and Sustainable Nation Ireland, which is promoting Ireland as a hub for sustainable finance.

It is being unveiled against the backdrop of last month’s landmark report by the UN Intergovernmental Panel on Climate Change, which warned there is only a dozen years for global warming to be kept to a maximum of 1.5 degrees.

The European Commission has said Europe requires €177 billion in additional yearly investment up to 2030 in clean energy to keep the increase in global temperature to well below 2 degrees.

The lack of clarity surrounding emissions disclosures makes it impossible to fully understand the impact any one company is having on climate change, as well as its exposure to climate risk, according to those who have set up the initiative.

As investors and other stakeholders increasingly call for greater transparency on climate-related disclosures, the club has challenged companies around the world to step up their efforts and commit to disclosing 100 per cent of their “Scope 1 GHG emissions”, which are direct “from owned or controlled sources”.

Charles Donovan, director of the Centre for Climate Finance & Investment at ICLBS, said: “Companies are under increased pressure from stakeholders to disclose their approach to climate risk. But if the underlying data isn’t up to scratch, then even the most sophisticated and robust risk management framework is rendered useless.”

BoI to close branches in North, property prices to rise 4%, and tricky vaccine issues for employers 06:46
Irish start-ups slump to four-year low amid Covid-19 06:30
High levels of public investment to be maintained for coming years, Donohoe says 05:56
Tax questions for adopted child inheriting from birth parents 05:50
‘Working from home has changed how I spend but not how much I spend’ 05:30