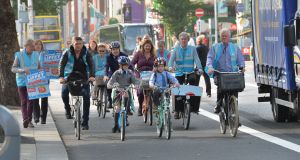 Members of the Dublin Cycling Campaign at a photocall in advance of the a large family friendly demonstration in support of the Liffey Cycle Route on Sunda. Photograph: Alan Betson

Cyclists are calling on Dublin city councillors to approve plans to construct a segregated cyclepath along the Liffey quays which was initially proposed more than five years ago.

The council’s transportation department has presented eight different “preferred routes” for the 6km path from Heuston Station to the East Link bridge since 2012, but has yet to secure the sanction of councillors for any of the options.

Councillors last May delayed approving the scheme after the officials presented plans which they admitted were not the best solution for the route.

The previous October the transportation department had proposed facilitating the continuous cycle route by implementing a permanent ban on private cars and lorries from Ellis and Arran Quays, diverting traffic for 1.5km through the residential streets of Stoneybatter and Smithfield.

The diversion was necessary to get around a particularly narrow section of the quays between the James Joyce Bridge and the Four Courts.

However in May, the council’s head of technical services Brendan O’Brien said although this was the “best solution” for the route, he did not propose pursuing it because it had met with considerable opposition from councillors, residents, schools and businesses.

Instead, he proposed keeping all traffic on the quays, with cyclists using a boardwalk over the river on Ellis and Arran Quay, which would add up to €3 million to the €20 million cost.

Buses and cars would share a lane for another short section with cars and buses having to “queue” at certain times. In parts, cyclists and pedestrians would share the same space.

This option would be “considerably more expensive” than the previous one, Mr O’Brien said and would also require an application to be made to An Bord Pleanála. Councillors asked to have further assessment conducted on the route.

The Dublin Cycling Campaign is calling on councillors to chose the previous option, which diverted cars from the quays, when the council’s traffic committee meets later this month.

“The boardwalk option is likely to cause problems for cyclists crossing footpaths. The result will be that commuter cyclists will continue to use the road because it will be quicker, ” campaign spokesman Kieran Ryan said.

Former Dublin hurler and footballer Conal Keaney, who owns Phoenix Park Bikes cycle hire shop, says tourists are afraid to cycle into the city centre because of the traffic on the quays.

“The proposed segregated route from the Phoenix Park down along the historic spine of the River Liffey would be a great attraction, for commuters, leisure cyclists, and tourists alike, and has the power to transform this area of the city.”

A cycle to support the Liffey route will be held on Sunday, starting at the Wellington Monument in Phoenix Park at 11am.

The group will cycle down the quays to the Samuel Beckett Bridge and then along the North Circular Road as far as Phibsborough.

The cycle will end on Leinster Street where residents involved in the Phizzfest festival will host an on-street celebration.