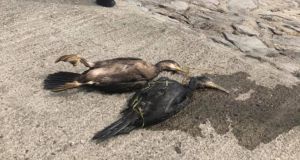 A number of birds including other cormorants and cygnets were removed from the river. Photograph: Athlone Town Facebook page

An oil pollution incident on the river Shannon south of Athlone, which has killed cormorants and fish, is being investigated by Westmeath County Council.

The incident happened at the weekend, initially affecting the Al River, a tributary of the Shannon in Athlone-Moate municipal district. The local authority deployed a boom there, where the spill is believed to have occurred, in an effort to contain the oil.

The waterside location known as the Big Meadow, a kilometre down-river from the Shannon bridge in the centre of the town, was also affected.

The council said “oil retention barriers remain in place but it is clear that oil has escaped from the tributary and into the main channel of the River Shannon”.

It added: “We will be taking measures to commence the clean up as soon as practically possible. We would also like to confirm that the source of the contamination is downstream of the water treatment facility in Athlone.”

A number of birds including other cormorants and cygnets were removed from the river by Athlone Society for the Prevention of Cruelty to Animals, and washed in an effort to keep them alive. Some fish were also removed to protect them from the pollution.

Acting director of service for the council Mark Keaveney said its environmental staff were investigating the pollution and trying to establish its source.

“We would like to acknowledge the very helpful assistance of angling and wildlife volunteer groups who have been able to reduce the impact of this incident on the local wildlife,” he added.

The relevant statutory bodies were aware of the incident, he said. The Environmental Protection Agency confirmed the council were leading the investigation.

A spokesman for Athlone SPCA said some of the birds had been taken for special cleaning to an animal sanctuary in Co Kildare. Dogs who entered the river since Saturday also had to be cleaned.

Welfare officer Billy Gallagher told Midlands 103 radio that the oil spill in the river Shannon was very serious and it would be a difficult operation to remove it. Their difficulties were added to by rough weather over the weekend which had broken up the oil slick. As a consequence, oil had sunk to the bottom of the river where it caused most damage.