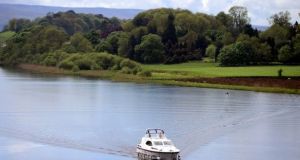 Boaters on the Shannon may be hit with new charges and penalties if proposals from Waterways Ireland go ahead. Photograph: Bryan O’Brien

Boaters on the Shannon may be hit with new charges and penalties if proposals from Waterways Ireland go ahead.

The cross-Border authority, responsible for managing much of the island’s navigable inland waterways, has proposed a permit system for boats on the river for the first time.

It is reviewing Shannon Navigation bylaws, which could result in the biggest changes since commercial traffic declined in the 1950s.

At present, boats on the Shannon with engines 15bhp or above have a legal requirement to register with Waterways Ireland but there are no changes or permits required. The authority does have a permit system for use of the Royal and Grand Canals and permits cost about €152 per boat, per year.

While the authority said the review is ongoing it has identified four key areas for change and said it has “notified the Inland Waterways Association of Ireland and the Irish Boat Rental Association of its thinking”.

As well as introducing a paid permit system, the authority’s proposals include on-the-spot fines for boat owners who fail to obey regulations in relation to issues such as mooring time limits and the use of pump-out services for sewage holding tanks.

Charges for using locks, currently at €1.20 per passage would be abolished, under the plan.

And the present “winter mooring” system would be replaced with the “five-day rule” which applies in summer. The winter mooring system currently allows owners of vessels to moor at public harbours and jetties along the navigation from November to March for a fee of €83 for these five months. The new scheme would abolish winter moorings and restrict boats to staying just five days, similar to the rule currently in existence during the summer. The authority said it has already withdrawn electricity and fresh water supplies from jetties and harbours during the winter.

Waterways Ireland is also reviewing the five-day summer rule. Under current regulations the mooring limit is five consecutive days or a total of seven days in any one month, at public harbours and jetties during the summer period, from April 1st to October 31st. Under new proposals this would change to three consecutive days at some of the more popular public harbours and jetties, in a bid to deal with so-called harbour hogging, and overcrowding.

Éanna Rowe, Waterways Ireland manager with responsibility for the west of Ireland, said there was a need to streamline services for waterways users.

He said the issue in relation to winter moorings was that the low cost was undercutting private marinas along the waterway and it was not the role of waterways Ireland to use taxpayers’ money to undercut the private sector.

Mr Rowe said the proposals had begun in an “internal” Waterways Ireland review which was ongoing and the next stage would be to complete that review and then put the proposals out to public consultation.

Since its inception in 1999, Waterways Ireland has developed a series of smart-card operated toilet, shower and in some cases laundry blocks, as well as maintaining and extending jetties, harbours and piers. It also maintains and expands navigation markers and is involved in the development of “blueways” and heritage trails along waterways. In addition to the Shannon Navigation waterways Ireland is responsible for Barrow Navigation, the Erne System, the Grand Canal, the Lower Bann, the Royal Canal and the Shannon Erne Waterway.