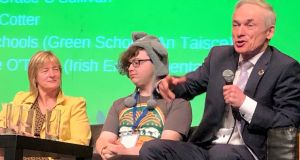 Minister for Climate Action Richard Bruton has strongly rejected a contention by a student “climate striker” that the Government is not engaged on climate action and is ignoring a growing global movement on the issue.

Saoi O’Connor (16) – from Skibbereen, Co Cork – has been protesting outside Cork City Hall every Friday since early January. The student, who describes herself as “the first climate striker outside of Dublin”, asked the Minister when he was going to wake up to climate.

“We have heard nothing from him. Richard Bruton has not engaged with us,” she said at a panel discussion on sustainability at the Irish Second-Level Students’ Union annual conference in Dublin.

Mr Bruton said he was making significant changes in response to the threat of climate breakdown. Ireland had recently committed to increasing from 30 to 70 per cent its target for electricity generated from renewable energy; major changes were in the offing on solar and onshore and offshore wind developments; and €20 million was allocated for an electric vehicle charging network.

Ireland had 11.5 per cent EVs and hybrids, the Minister said. “We need to get that up to 100 per cent over the coming decade,” he added.

The Republic needed to reduce its carbon emissions by 30 per cent by 2030 “and approach near-zero carbon impact by 2050”– amounting to a dramatic change. That journey “won’t be all easy”, but at the end Ireland would be a much better place, Mr Bruton added.

Part of that journey required harnessing of the energy of the young generation in getting whole communities to change how they live, Mr Bruton suggested.

A road map for all sectors would feature in a Government report to be published next month and provide the necessary detail, he said.

Independent Senator Alice Mary Higgins, who is standing in the Dublin constituency in the European elections, said that in addition to climate actions, there was a need to “apply the brakes on things that are wrong”, especially fossil fuel extraction.

She recommended students reach out to younger people elsewhere and have an international conversation to co-ordinate their response because every government would make special pleadings as an excuse for inaction, such as protecting the car industry.

There was a tide demanding change now, though it was passed the 11th hour, she said, adding there was a need for serious political leadership: “it cannot be business as usual.”

Green Party senator Grace O’Sullivan said the school climate strikers should make every effort to “put pressure on the system; in the home, school, community and beyond”.

“At this moment of climate crisis and biodiversity extinction, if we don’t mobilise every single person, we won’t see change,” added the Ireland South candidate.

The scale of the task facing Ireland was indicated by its deplorable public transport system, Ms O’Sullivan said. “I don’t know how you got here today. In the Netherlands, public transport would be your first opportunity.”

Green Schools climate action officer Grainne Ryan said the climate message was being heard in schools, as indicated by its annual climate action week in October. There was a need, however, to embed the issue in formal subjects, so that it could be studied it in depth, rather than having “a token paragraph,” she said.