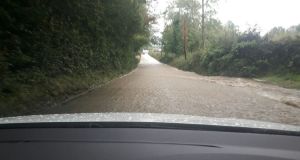 Flooding on the Arva to Cornafean road in Co Cavan after torrential rain on Tuesday afternoon.

Gardaí have warned motorists to take extra care after several incidents of flash-flooding across Donegal.

The Dry Arch roundabout in Letterkenny has been flooded and Donegal county council workers have been working to try clear it.

There are also reports of flooding in other towns across the county including Ballybofey, Lifford and Buncrana.

There are reports of flooded roads too in Co Cavan.

It follows major downpours across the north-west on Tuesday afternoon.

The head of the Garda Traffic Corps in Donegal, Inspector Michael Harrison, asked drivers to slow down during heavy rain.

“It is so important that drivers do not take any chances and that they slow down during heavy rain. Also they should not drive through any flooding at any speed.

The thunderstorms are set to clear Tuesday night as the humid weather gives way to sunnier spells from Wednesday morning.

Met Éireann had issued a status orange thunder warning, the second highest level of warning, for the entire country until 11pm on Tuesday night.

There is also a status yellow rainfall warning in place for all of Connacht as well as counties Cavan, Monaghan and Donegal.

There will be “widespread showers with heavy thundery downpours” as well as “the risk of localised spot flooding...and hill and coastal fog,” according to Met Éireann.

Temperatures remain high at between 18 and 22 degrees.

Met Éireann forecaster Pat Clarke said while the rest of the week will be changeable, it will be less humid than in recent days.

“There may be some thunderstorms on Tuesday night but it will clear up from Wednesday with sunnier spells and less heavy rain showers,” he said.

Wednesday will be largely dry with sunny spells in the morning, before showers become more widespread in the evening.

The rest of the week will see “some rain or showers at times (mainly affecting northwestern areas) but overall a good deal of dry weather and with temperatures close to the seasonal norm”.

1 UK to close borders to non-English speakers and unskilled workers
2 Sinn Féin seeks to draw line under TD’s ‘unacceptable’ tweets
3 Draining the swamp? Trump in spree of clemency for rich white men
4 A Russian cruiser with ‘cannibal rats’: What other ‘ghost ships’ could be out there?
5 New Sinn Féin TD apologises for ‘glib, off-the-cuff tweets’
Real news has value SUBSCRIBE