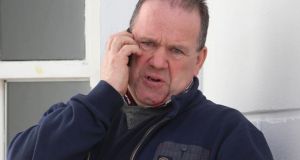 Jim Ferry, who runs two waste companies in Donegal, was present for the case and represented himself in court

Jim Ferry, a serial illegal waste dumper from Co Donegal, should be arrested and jailed for contempt of court orders, a judge has ruled.

Once detained and brought to prison, the only way Ferry could be freed is by showing the court that he is complying with an order it made last April, the High Court was told. The order directed him to clean up an 11-acre illegal dump he was operating in at Rossbracken near Letterkenny.

The site is in a special area of conservation and is on the Wild Atlantic Way near Lough Swilly. It was found last year to contain between 28,000 and 36,000 tons of illegally dumped household waste that had been buried and several thousand tons more hidden in sheds and strewn around the site. The waste was leaching toxic leachate into a stream flowing into the lough.

In what is believed to be the first case of its kind, Donegal County Council pursued Ferry to the extent of asking for his imprisonment because of his record of persistent illegal dumping, for which he has District Court convictions, and for failing to comply with the April High Court order.

“While I hear civil cases, I have never had occasion to send an individual to prison,” Mr Justice Max Barrett said as he considered the case. “I am afraid that I am faced with the circumstance where there is a constant, deliberate and willful refusal to comply with the court order.”

He said he had thought about jailing Ferry for a specific length of time but, because of the evidence, he resolved to issue a committal order “whereby Mr Ferry will be lodged in prison until he purged his contempt”.

Ferry, who runs two waste companies in Donegal – Ferry’s Refuse Collection Limited and Ferry’s Refuse Recycling Limited – was present for the case and was accompanied by two male supporters.

Representing himself, he denied refusing to comply with the order, claiming he could not comply because he could not find a legal way of removing and disposing of the Rossbracken waste. It was claimed in court that Ferry has made millions through illegal dumping but he claims to be financially broke.