An estimated €95m has been spent on unbuilt Dublin incinerator 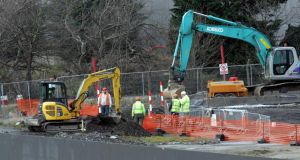 Works being carried out on the proposed incinerator site in January 2010. Photograph: Cyril Byrne/The Irish Times

Consultants paid more than €32 million over the proposed development of the Poolbeg incinerator are to have their contract terminated by Dublin City Council in January.

In excess of €95 million has been spent by the council over more than 10 years on the incinerator, which remains unbuilt. Some €50 million went on land for the facility on the Poolbeg peninsula, but almost a third of the costs over that period were paid to consultants.

Head of waste management Peadar O’Sullivan yesterday told councillors the contract with consultancy firm RPS would be terminated. The move follows the intervention of the European Commission, which found that the contract did not conform with EU law.

However, plans for the 600,000-tonne incinerator have not been abandoned. “We have undertaken to terminate the client representative [consultancy] contract and we will be appointing a fresh appointee by the end of January 2014,” Mr O’Sullivan said.

A revised project agreement is also due to be signed with the incinerator developers Covanta early in the new year, with construction due to get under way next year.

The incinerator was first proposed in 1997 and was granted planning permission in 2007. There was a brief period of site clearance work, but construction has yet to start.

Delays had mainly been caused by difficulties for Covanta in securing finance for the project, Mr O’Sullivan said, and two investigations of the council by the European Commission. The council was last month cleared of breaching State aid rules and will be cleared of breaching procurement rules once the RPS contract has been ended, he said.

“We have spent an extraordinary amount of money, more than €95 million, and it is legitimate to ask where we are going with all of this. But finally we can bring certainty to this very long saga,” he said.

The commission undertook its investigation on foot of complaints from Sandymount residents Joe McCarthy and Valerie Jennings.

While it upheld the complaint in relation to the procurement of consultancy services, it dismissed several others.