AA says Dublin City Council has ‘blind spot, to the point of being spiteful’ when it comes to cars 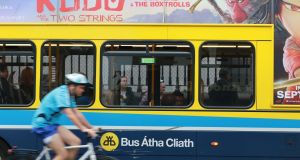 An analysis of bus journeys on the north and south quays showed substantial time savings. 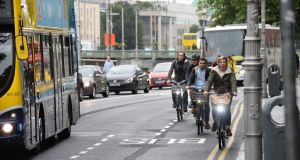 Bus journey times along Dublin’s Liffey quays have been reduced by up to 45 per cent following the introduction of restrictions on cars, according to the National Transport Authority (NTA).

Cars have been banned from turning right from Bachelors Walk on to O’Connell Bridge since August 21st. General traffic has also been reduced to one lane from Ormond Quay to Eden Quay on the north side of the river Liffey and from Burgh Quay to Essex Quay on the south side, to create additional bus lanes.

The ban on cars turning right from the north quays on to O’Connell Bridge has been introduced to minimise the potential conflicts between cars and the new Cross City Luas trams, which will travel north across the river on to O’Connell Street from December.

An analysis of bus journeys on the north and south quays in the first week of September this year compared with the same period last year showed substantial time savings, depending on the time of day, with improvements at their best during peak commuting times.

Journeys along the north quays, from Ormond Quay to D’Olier Street, showed the biggest improvement with journey times reduced by just under 45 per cent from 9am-10am, 37 per cent from 8am-9am, and more than 26 per cent from 4pm-5pm.

NTA chief executive Anne Graham welcomed the “confirmation of the benefits” the traffic changes had brought.

“It is the case that some businesses expressed concerns over the bus prioritisation measures for the quays, but we were always confident that not only would they deliver faster journey times for passengers, but that they would also free up scarce road space and make provision for even more buses along these stretches,” she said.

“This means that these commuters will be spending less of their time on a bus, and more time on the things they would prefer to be doing.”

No analysis has been undertaken of the effect of the changes on car journey times.

AA’s director of consumer affairs Conor Faughnan said the lack of data on the impact on motorists showed a “blinkered view” of city commuting.

“There is a blind spot, to the point of being spiteful, when it comes to certain transport modes, among certain voices in Dublin City Council, whose only thought is ‘how can we block cars’.”

“The NTA are proudly telling us about the improvements to bus times, but doesn’t even consider the consequences for commuters who have to use their cars.”

AA Roadwatch had noted increased traffic on the North Circular Road and Amiens Street since the changes were introduced, he said.

A survey conducted by the organisation, which represents more than 1,300 companies, found just two per cent of commuters noted an improvement in the commute time to or from work in the three weeks following the introduction of the traffic changes on the quays. One-third of respondents noted no change in their commute time.