Ethna Viney on a bee-like hoverfly, a coral find, and an amber-winged dragonfly 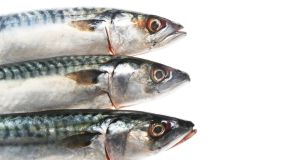 One reader found hundreds of mackerel washed up on Lahinch beach

I found this strange object and others of various shapes on Mornington beach last month. It was fibrous and seemed to be living.
Gerry Douglas, Ballyboughal, Dublin
It’s the soft coral called dead man’s fingers, Alcyonium digitatum. It’s found on all the coasts of these islands.

This bee, about the size of a honeybee, was trapped in the house. It had a near-white band mid-abdomen and zig-zag markings on the wing.
Simon Rogers, Sandyford, Dublin 4
Not a bee – that’s the pellucid hoverfly, which is very fond of bramble blossoms.

The children found this large crab shell on Beal Bán beach in Ballyferriter, Co Kerry, and they are wondering who it belongs to.
Gavin Ó Dúill, Clondalkan, Co Dublin
It’s the shell of the spiny spider crab.

Attached is a photo of a dragonfly clinging to a bamboo plant in my garden, What type is it?
Janet Little, Navan Road, Dublin, 7
It’s the amber-winged hawker.

Can you identify these strange mushrooms we found in our raised vegetable bed?
Zoe Chambers, Lusk, Co Dublin
They are bird’s nest mushrooms, common but sometimes hard to find. They are inedible.

On July 29th there were hundreds if not thousands of mackerel washed up on Lahinch beach. Any idea why?
Nicola Meere, Ennistymon, Co Clare
One explanation is that the mackerel were pursued by large predators and fled in the one direction, ending up on the beach. Or they themselves might have been chasing sprats and ended up on the beach.

My daughter Susanna (10) took this photo of mating insects on what I believe is a wild orchid. What are they?
Robert Bloomer, Monkstown, Co Dublin
They are a pair of 6-spot burnet moths on a pyramidal orchid.