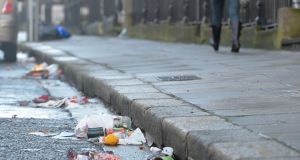 Conor Horgan from Ibal said: “Dublin City Council concedes that efforts to mobilise community groups in the North inner city to assist in tackling the litter problem have met with little or no success.” Photograph: Alan Betson

Litter and illegal dumping is persisting in “social housing areas” and “disadvantaged” parts of the cities because local communities will not clean their streets, Irish Business Against Litter (Ibal) has said.

The anti-litter organisation’s national litter survey, carried out by An Taisce, found that 80 per cent of Irish towns and cities were as clean as their European counterparts, but large social housing estates and disadvantaged areas with transient populations had poor cleanliness levels.

Galvone in Limerick was the dirtiest area surveyed, followed by Dublin’s north inner city, the northside of Cork city, Limerick city, Mahon in Cork city and Ballymun in Dublin.

“Once again there was a wide gap between towns and disadvantaged city areas, with the latter occupying the bottom six places in the ranking,” Ibal spokesman Conor Horgan said.

“We haven’t seen as much improvement in these social housing areas, where communities are often transient, social neglect is evident, and community groups and tidy towns committees are lacking compared to in mixed communities,” Mr Horgan said.

A “lack of community involvement” in these areas meant they continued to be “plagued” by litter, he said.

“Without these volunteer forces supporting the efforts of the council, these areas will simply not be clean on a sustained basis.”

Dublin’s north inner city, consistently one of the most littered places, had improved slightly over the last year, following the installation by Dublin City Council of CCTV cameras to catch illegal dumpers, but there was still “an abundance of littered sites” in the area the survey found. Most of these sites had suffered “long-term abuse”.

“Dublin City Council concedes that efforts to mobilise community groups in the North inner city to assist in tackling the litter problem have met with little or no success,” Mr Horgan said.

From a tourism point of view the improvement of the cleanliness around Dublin Airport, which had been a blackspot five years ago, was particularly encouraging he said, and 85 per cent of tourist spots surveyed were clean, but littering on beaches was of great concern he said.

“This summer we again had examples of extreme littering on beaches for examples, which display a worrying indifference to the natural environment. Marine litter is a source of great concern at present and an issue Ibal may concentrate more on in the future.”

The organisation supported the “polluter pays” principle behind the mandatory pay-by-weight bin collection charges but was of the view that some of the monies raised should be ringfenced for councils to tackle “the increased dumping that will result from people looking to evade the charges”.